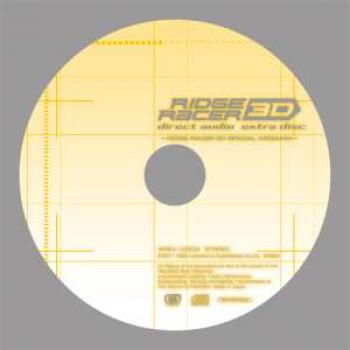 Released as a bonus for those who picked up the game from the M3 event or pre-ordered from their Sweep Record store, the Ridge Racer 3D Direct Audio Extra Disc features an extensive megamix by Supersweep's Takahiro Eguchi featuring a variety of themes from the game. How does it turn out?

One of the good things about this megamix is that it is a lengthy 32 minutes long. In addition, I think that Takahiro Eguchi chose some great themes to include in the megamix and manages to transition and place them in an order that makes a lot of sense. The theme opens with one of the softest electronic themes, "Nitro Right Now," before progressing to "Phantasize" by Ryo Watanabe. I particularly like how he transitions between these two because as you think he’s going to move onto the latter, he throws in some more beats and vocal samples from the former.

From "Phantasize," the remix transitions into "NOx Warheads" from Ayako Saso before moving onto "Aberration" from LindaAI-CUE. Although this was definitely an odd choice to include in the mix, I think placing it between "NOx Warheads" and "Napalm Sled" by Shinji Hosoe, really managed to break up some of the intensity of the theme while also adding some new musical colors into the mix. Following "Napalm Sled," Eguchi continues the journey with "Psychokinesis," also from Hosoe before moving onto Hiroshi Okubo’s "Stream of Lights" which helps bring the energy level down a bit, but manages to work into the overall flow of the megamix. After the awesome warbly section in "Streams of Light," the theme transitions into "Rolling Glider" from Keiichi Okabe, bring a nice funk to the mix.

My favorite part of this mix is definitely as it starts to transition into "My Crazy Chainsaw" by Ayako Saso. There are times now when I listen to the original "Rolling Glider" and automatically imagine the crazy vocal samples mixed with the funky guitar riffs as I think they are an extremely stellar and surprising combination. The last five minutes of the mix are definitely the most hardcore, featuring the aforementioned "My Crazy Chainsaw," with some manipulation as to when certain elements appear, such as the frenetic electronic fanfare that normally starts the theme, before seamlessly transitioning into "Dr. Mad's Gone" to end the track on an extremely intense note.

In the end, I think that Eguchi's megamix for Ridge Racer 3D manages to capture the varied nature of the soundscape featured on Ridge Racer 3D Direct Audio in an extremely satisfying mix that lasts for over 30 minutes. It really works well as a track to listen to if you want an abbreviated version of the soundtrack, as it choses some of the best tracks on the soundtrack as well. If you have a chance, definitely try to pick this up alongside your copy of the soundtrack, if you are able.