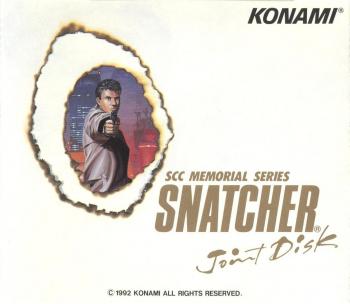 Snatcher was a 1988 adventure game from Hideo Kojima of Metal Gear fame for the MSX home computer system. Inspired by science fiction, especially Hollywood movies like Terminator 2 and Blade Runner, the game's story was brought to life with animated cutscenes and the complex twists and turns that Kojima has become known for. The game's music made use of Konami's new SCC, a sound chip that allowed the use of more channels and a greater range of tone color than the MSX's built-in processor. SD Snatcher, an RPG parody based on Snatcher featuring chibi versions of the characters, used a more advanced version of the chip in 1990. Both soundtracks are collected in their complete forms in the SCC Memorial Series Snatcher -Joint Disc- set.

The SCC provides a richer sound to these scores than the internal sound chips of the time, and the sampled percussion add to their imitations of the sounds of rock, funk, and big band. A version of the chip used in the Famicom version of Castlevania III may be most familiar to general fans of video game music. There is a scratchy quality to the sound that may be more grating to some than the more "pure" sounds of other synthesizers of the time, but the added variety in color makes up for this.

Snatcher's score, composed by Masahiro Ikariko and Mutsuhiko Izumi, is strongly influenced by rock and jazz, reflecting the game's futuristic city setting. The game's main theme is unapologetically video game music, with its techno beat and syncopated melody, and the complex percussion at the end is icing on the cake. The theme shows up several more times in the soundtrack, bluesy in "Theme of Snatcher Part 2", reflective in "Part 3", and faster and more driving in "Theme of Junker". These variations are all done well and help to integrate the stand-alone score. Their placement within the game is also memorable and effective.

Much of the rest of the score, while well-composed, simply touches on a given mood. "Danger Dance ~ & Justice All" is tense with anticipation. "Innocent Girl" is drawn into mourning by low pedal notes, like an organ. "Theme of Izabel Parts 1 and 2" are characterized by Jazz Fusion and Ragtime, respectively, but they don't develop into anything more. Likewise, the phasing effects in "Spreading Die Hard" connote minimalism, but only for a brief glimpse. Such tracks were effective for their time, making good use of the SCC to enhance the mood of the game and define certain events and characters. However, they are often dull by today's standards.

The soundtrack picks up some steam as it reaches its conclusion. Each of the three sections in "Pleasure of Tension" ratchets up said tension, growing from the eerie arpeggiated chords of the first to the off-kilter rhythms of the third. "Beyond Sorrows" is a striking sad theme, but it needs to go somewhere musically, and ends up sounding over the top. "Master of Puppets Among the Disease" may not feel quite complete in and of itself, but it's a great intro. Described as the crowning jewel of the soundtrack, Izumi's "Theme of Ending" features strong music that underscores the conclusion well. However, it doesn't always justify its 17-minute length and often ends up feeling repetitive.

SD Snatcher's soundtrack, composed by a significant portion of the Konami sound staff, begins strongly. "Strange Overture", like proto-Mega Man material, is driven as much by its seemingly effortless countermelodies as by its rock rhythms. It already sets a lighter mood for this parodic spinoff. "Difficult Move" feels like a variation on the original Snatcher's main theme, and the sampled percussion works quite well here, and the main theme is further reprised in "Warning". Testifying to the experimental tendencies of some of Konami's in-house composers, the middle section of "Modern Crusade" unfolds its melody and countermelody over a limping 6/4 drum beat reminiscent of progressive rock.

After this promising opening, however, disappointing tracks such as the dull pop of "Kasuga" and the forced, artificial tension of "Stress" and "Bio Syndrome" stand out all the more as filler. Tracks that could become something better, such as the organ-like "Theme of Katherine #1", are left underdeveloped and unfinished for the sake of the in-game experience. Meanwhile banalities like "Reconciliation" and the irritatingly bouncy "Percussion Head" are given too much time. "An Awful Fellow" depends on stock comic clichés for its entire length, even making use of the stock "snake charmer" melody known to every schoolchild.

A funk influence runs throughout the score, with straightforward tracks like "For M.M." being the clearest examples, but the characteristic bass grooves of the genre appear elsewhere in tracks like "Factory Place", "Junker HQ", and "North Downtown". Such tracks reflect the gritty, urban setting of the game, while building upon the distinctive "Konami sound". The baroque Preludes 1 and 2 and fairground waltz on "The Merry-Go-Round" feel more out of place, and they stand out as uncreative pastiche. These kinds of tracks work best when they feel integrated into the rest of the music and in-game experience, so that they are of the same world, so to speak.

The strongest track in the score is "Jim & Hilda". A plaintive melody wails against an echoing ostinato, a piano adding gentle accents in the upper register. When a snare rhythm enters halfway through, and the key shifts suddenly, the tone shifts accordingly from mournful to sneering. Quickly rising chromatic scales in the last section dissolve into the return of the beginning. Much less successful is "Sunrise", which stretches its uninteresting melody with melodramatic angst. The finale, "Coda", which plays out like a shortened version of the first Snatcher's ending theme, works well. Its driving rhythm and vintage Konami melody make for a strong conclusion.

Snatcher's soundtrack is well-written, if a bit anonymous, with a strong main theme and the crisp sound of the proprietary chip helping push the soundtrack beyond the norm. It works especially within the game, enhancing several iconic scenes and offering some moody underscore. The SD Snatcher soundtrack has great moments and serves as an interesting contrast to its moodier counterpart. Yet possibly owing to the many composers involved in the project, it feels unfocused and never develops a distinct style of its own. The highlights are surrounded by uninspiring imitation and timeworn cliché. Both soundtracks are also impressive from a technological perspective, at least for the time, using the SCC chip to explore styles and moods with a depth rarely encountered in other game soundtracks from the 1980s.

This set serves as a complete, well-presented compilation of two influential and historic soundtracks. However, it has become quite rare, so it is necessary to harbour strong feelings of nostalgia for Kojima's early games in order to justify the asking price for the content.

(Track 6 is an arrangement of 'Jingle Bells', originally composed by James Lord Pierpont.)