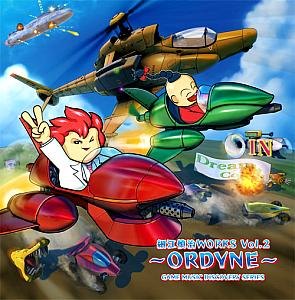 The majority of the soundtrack release is dedicated to that of Ordyne and features an arrangement of the “Round 1” theme by Ayako Saso. The music itself is comprised mostly of the various round and boss themes, although name entry, ending, and other various themes are also present. “Round 1” is a fun little tune with a great melody and plenty of quirky funkiness. Also using this base tune is “Round 7.” It’s a bit more quirky and the melody is employed a bit more experimentally. “Round 2” definitely gives off the feeling of flight and I really like the bubbliness of the melody mixed with the darker accompaniment.

“Round 3” is a fast paced tune that features a short, albeit quite good, melody that conjures up a joyous atmosphere while “Round 4” is  a quirky tune that gives off a bit of an icy vibe due to its xylophone based melody. “Round 5” is a decent tune that succeeds more so in the accompaniment, but does give off a nice vibe with its fast paced melody while “Round 6” is a short tune featuring a series of sounds that sound like warning music more so than a stage theme. Out of context, it doesn’t stand to repeated listens. “Special BGM2 (Round X) features a very heroic and airy melody that features a variety of different synths and tones with almost a progressive rock vibe at times. It is definitely one of the best stage themes on the album.

The boss themes are all quite short and manage to give a different feeling with each one. “Boss 1” gives off a nice intensity and the dark synth in the accompaniment works well with the intense percussion. “Boss 2” isa sinister theme, albeit short, that features a dark atmosphere and plenty of industrial percussion. “Boss 3” is another sinister theme that focuses more on atmosphere than intensity. The bass also helps set the mood while “Boss 4” is a slow tempo theme featuring a very dark melody. On the flip side there is “Boss 5,” a fast tempo theme that focuses more on a chaotic sense in the melody and plenty of heavy percussion and slap bass. “Boss 6” is a dark theme that gives off a tense atmosphere thanks to the various synths used as well as the frequent changing of melodic ideas while “Boss 7” has almost a 90’s rave sound mixed with a frenetic melody line and plenty of heavy percussion. Lastly, “Special BGM3 (Boss X)” has a very Streets of Rage sound to it, giving it a sinister and funky atmosphere.

There is also a substantial ending theme that has a very calming and crystalline sound that gives off a sense of accomplishment but also mystery. ForOrdyne’s bonus track, Ayako Saso’s arrangement, titled “Ordyne Arrange Version "System of Love No. 2",” is a take on the “Round 1” theme and features a peppy, retro sound with vocals by Mizuho Yasuda and Sea Scorpion. It’s definitely a fun take on the original and the processed vocals really work well with the synthesizer employed. For those who don’t enjoy Japanese vocal themes, this one may not be for you, but the music behind the arrangement is quite beautiful.

The second soundtrack featured on the release is for Metal Hawk. The majority of the themes are comprised of “Game BGM” and “Map Mode” varieties. “Map Mode A” gives off a sense of adventure with a decent melody while “Map Mode B” opts for a more industrial and sinister vibe, but doesn’t focus much on the melody. “Game BGM1” definitely gives off a nice sense of flight with a fantastic melody, some great progressive rock sounding solos, and plenty of variety in terms of progression. “Game BGM2” definitely has a more earthy tone due to the focus on slap bass. There is plenty of variety in this tune as well in terms of melody and it serves as an enjoyable listen. When it comes to “Game BGM3” there is a bit of a jazzy flair mixed with plenty of of great synthesizer passages when it comes to the melody. “Game BGM4” gives off a cave like atmosphere thanks to some of the instrumentation used, but the melody is superb. Lastly, “Game BGM5” features plenty of percussion and is somewhat sinister and mysterious. It doesn’t really stand out compared to some of the other themes though.

Arranged by Ryo Yonemitsu, “Metal Hawk Arrange Version "GAME BGM1 -THE PROGRESSIV -"” is his take on “Game BGM1.” For the most part, this theme sounds very much like the original at first, with just synthesizer being updated. However, there is definitely a little bit of a rock edge introduced and there are definitely a lot of solos that help give it more of a progressive rock sound thanks to the updated synth. However, the true star is in the second half of the arrangement when electric guitar and keyboards are incorporated to give it a more modern sound.

The third soundtrack featured on the release is that for Dirt Fox. It’s a fairly short contribution featuring mostly reiterations of “Running Up!.” “Running Up! (Solo I)” features a very bubbly melody line with a bit of funk, thanks to the slap bass in the accompaniment. The “Solo II” and “Solo III” versions are very similar as well, however, the portions in the middle change up a bit to give them a different sound. Yousuke Yasui’s take on “Running Up!” is “.” It features the same melody but more in the retro style one might associate Yasui’s more recent works with. It’s a fun arrangement, but I enjoy his original works more. The other arrangement of “Running Up!” is by Shinji Hosoe and is from a previous release of the soundtrack and manages to keep the flavor of the original with some less restricted synth capacities, as this was originally made in 1989.

In the end, Shinji Hosoe Works Vol. 2 ~ORDYNE~  does manage to provide an entertaining listen. Is it as good as his Dragon Spirit release? No, but it does provide some solid efforts overall. The three arrangements manage to entertain as well, but may not be for everyone. I’d recommend this release for fans of the retro music heard in these series and if you are able to purchase it from the Supersweep store, while supplies last, you’ll get a special bonus disc that features an Ordyne medley, a voice collection for Metal Hawk, and a karaoke version of Ayako Saso’s arrangement for those who don’t enjoy the vocals in the one provided on the soundtrack.

Album was composed by Синдзи Хосоэ and was released on April 12, 2013. Soundtrack consists of tracks with duration over . Album was released by SuperSweep. 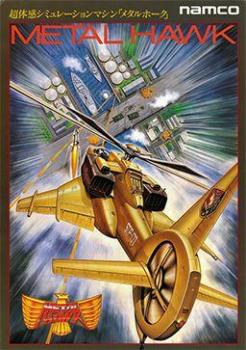