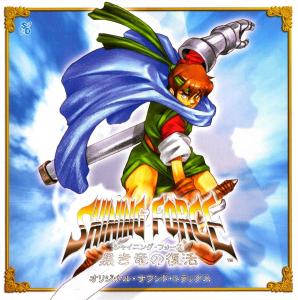 Many Shining followers were grateful that Flight-Plan's Shining Force Feather restored the series to its original strategy RPG glory. However, an aspect of the experience that didn't receive much praise was the music. Rather than seek the talents of Eternal Poison's Takashi Okamoto, Flight-Plan assigned a relative newcomer to handle the title, Kenjo Sakurai. The artist produced a range of effective background music, but little is enjoyable on a stand-alone basis.

Most of the soundtrack rehashes tunes from Shining Force for the Game Boy Advance without any major musical changes. While this may seem like a lazy decision, the original compositions were so accomplished that there was little need to change them. Whether the sad blooming melodies of "Grievious Gardiana", the unexpected gallant developments of "Cheerful Street Corner", or the mobilising dissonant strikes of "Armageddon", there are great compositions here. Tracks like these continue to serve their in-game purpose while delighting on a stand-alone level too. Given consumers never received a soundtrack release for the original Genesis title, the Game Boy Advance soundtrack partly compensates 12 years on and gives us a chance to remember what beautiful compositions were offered.

That said, the Game Boy Advance has a mixed effect on the compositions here. On one hand, the console's orchestral samples tend to sound more emphatic and realistic than the Genesis', particularly on the heroic march "Crusade" or the emotional battle anthem "Worthy Rival". On the other hand, the samples are often too muddy and dense to enhance more subtle tracks here. For example, "The Girl in the Sunbeams Through the Trees" lacks the dainty waltz feeling of the original file loading theme; even though there are few musical changes, the muddy nature of the Game Boy Advance's synth clouds the elegance of the composition. Equally unappealing is the synthesis of "Solemn Gardiana", with its unbalanced and forceful leads, while the beautiful moments of "Main Theme" are clouded by harsh treble frills and fuzzy bass lines.

The soundtrack is rounded off by a handful of original compositions to accompany new screens in the game. For example, Takuya Hanaoka sets a grand but reflective tone for the title theme with an orchestral march; though it establishes familiarity with a rendition of the main theme, it develops into a substantial composition in its own right. Another likeable addition is "Goddess of Light" with its warm and mystical soundscapes — among the most effectively implemented on the score. That said, the album is a little sparing on content — with just 25 main tracks and a handful of jingles — and the only way it sustains its 73 minute playtime is through extensive looping. In retrospect, the release would be of much greater value — especially to those opposed to Game Boy Advance synth — if the original Shining Force soundtrack was tagged on as well.

The Game Boy Advance featured one of the most limiting sound chips of all consoles and Shining Force: Resurrection of Dark Dragon certainly demonstrates this. However, the majority of the reprised compositions — and the occasional originals — are so delightful that the soundtrack is an enjoyable experience. That said, many consumers will still prefer the music of the Genesis original over the Game Boy Advance reprise.