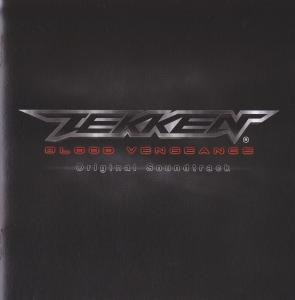 The Tekken -Blood Vengeance- Original Soundtrack features the music heard in the animated feature of the same name, recently shown in US theaters this past July and coming soon to theaters in Japan. Composed primarily by Hitoshi Sakimoto, with additional support by the rest of Basiscape, it features a variety of styles, ranging from orchestral to electronic. In the end, how well does the soundtrack fit within the world of Tekken?

Hitoshi Sakimoto provides a variety of soundscapes through his contributions to this soundtrack. The album opens up with "Crash," a hybridised piece that gives a hint as to what to expect from the soundtrack. Expect electric guitar riffs and bass guitar grooves in conjunction with brass highlights and sinister strings. It all provides a sense of chaos and omen. "Highway Battle" is an ominous and sinister theme that focuses on creating tension through its use of industrial tones, heavy synthesizers, and heroic orchestration. It's definitely an eye-opener this early in the soundtrack and shows Sakimoto's versatility as a composer.

That said, not all the soundtrack is about bombast. For example, "Ling Xiaoyu" is a chamber piece that provides a very beautiful theme for the character by the same name. The piano provides a very delicate touch to the melody, while the strings work — the primary focus on the piece — gives off a melancholy atmosphere. "Warmth" is a beautiful piece that definitely gives off a tender feeling. The piece opens up with a very endearing piano passage before incorporating some orchestral strings and woodwind work, reminiscent of his beautiful "The Cerobi Steppe" from Final Fantasy XII. As the theme ends, the endearing piano returns as a solo affair. This is definitely the most emotional piece on the soundtrack.

There are plenty of classic Sakimoto orchestral themes as well. "Kyoto Castle Battle" is a powerful track that provides an extremely beautiful, yet epic, backdrop to the main battle of the movie. There are chaotic strings passages, ominous brass and percussion tones, as well as some subtle electronic accompaniment. There is just so much detail in this piece alone and the harmonies really manage to bring a wonderful complexity to the piece. It's the most substantial piece on the album and really manages to sit among Sakimoto's best action themes, despite being for a film. "Legend" is one of the more powerful pieces. It drops the electronic elements for a purely orchestral affair, making for a very epic and powerful work.

"The Mishima Zaibatsu" is an ominous, dark electronic piece that provides a wonderful atmosphere. There is some subtle orchestral tones featured in the accompaniment, but for the most part, it's a very futuristic sounding theme. "Devil" is an ominous choral and orchestral piece that features a very dark atmosphere. The combination of militaristic percussion, orchestral swells, sinister strings, and electronic accompaniment prove to be a very successful combination in the latter portion of the track. "Collapse" and "Awaken" also follow a similar style with the chorus being more prominently featured. Similarly, "Combined Action" features a mysterious and sneak-like atmosphere through its use of ethnic and industrial percussion, harp, beautiful strings passages, and on occasion, some electronic elements. It's one of the more solid mysterious pieces offered on the soundtrack.

Yoshimi Kudo provides the setting for one of the larger battles in the movie. "New Kinkakuji Battle 1" opens up very atmospherically with a building electronic bass, synthesizer accompaniments, and some occasional guitar chords, before moving into an extremely powerful rock section full of heavy electric guitar riffs, groovy bass work, and electronic accompaniment. Its counterpart opens up with powerful electric guitar riffs before moving into a more drum n' bass style theme with the occasional rock accompaniment. The synthesizer melody has a very dark tone, reminiscent, in ways, to some of the heavier sounds in the DoDonPachi Dai Fukkatsu soundtracks. As the theme progresses, it becomes more mysterious in nature, mirroring the opening atmosphere of the first. Lastly, "Catch 22" opens up with an ominous electronic tone that gradually builds into frenetic strings work, synthesizer, and powerful percussion.

Masaharu Iwata's "Plot" features a dark and foreboding electronic tone with sinister strings work to provide a wonderful sense of an evil plan in the making. As the piece progresses, a swell in intensity is heard before closing. It's a very atmospheric piece, but a very strong one. His other notable piece is "Infiltration," which follows a similar style. It's a more upbeat piece, primarily due to the increased focus on electronic accompaniment, but a sense of a sneaking mission is definitely observed through its clever use of percussion, strings work, and synthesizer tones.

Several other Basiscape composers contribute to the soundtrack. Kimihiro Abe's "Daily Life" is a playful rock track with a carefree melody, while "Love Rival" is a quirky piece punctuated with pizzicato strings. Manabu Namiki's "Roof," arranged by Hitoshi Sakimoto," is a beautiful piece with some wonderful ethnic percussion and acoustic guitar work, supported by romantic strings work. Asuza Chiba's "Mr. Lee's Home," has a very classical sound with its ornate harpsichord use and pleasant melody. Other tracks, such as Namiki's "Jumping Off", Chiba's "School Festival Preparation", and Mitsuhiro Kaneda's three contributions, serve their purpose in context but are simply too short to be worth stand-alone listening.

The album closes with two themes. "Epilogue," composed by Hitoshi Sakimoto, is a beautiful piano piece that conjures up images of success and happiness. The album ends with "Staff Roll," composed by Hitoshi Sakimoto and Yoshimi Kudo, and is definitely my favorite piece on the entire soundtrack. Both composer's strengths are brought to the forefront with Hitoshi Sakimoto's beautiful orchestral workings interweaving with Yoshimi Kudo's edgy rock to provide a wonderfully diverse theme that goes through a variety of styles and focuses on some of the more memorable aspects of the soundtrack, such as groovy bass licks, fantastic electric guitar work, and powerful choral highlights.

In the end, I think the Tekken -Blood Vengeance- Original Soundtrack is a fitting accompaniment to the film. It manages to work as a stand-alone soundtrack that, while having many filler tracks, manages to provide a variety of substantial themes, in rock, electronic, and orchestral tracks, or a fusion thereof. All the members of Basiscape provide something worthwhile, whether it's a base melody arranged by someone else or a piece composed and arranged by one individual. If you happened to have seen the movie and enjoyed what you heard, this is definitely worth taking a look. Worst comes to worst, you can preview the album on iTunes and pick and choose the tracks you want. The more substantial themes are some of Sakimoto's best and are definitely worth a look.

This physical printing was released after the digital version.