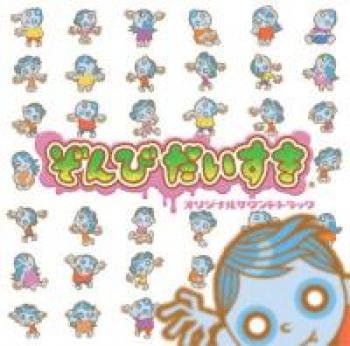 Zombie Daisuki is a game for the Nintendo DS developed by Chunsoft. The premise is to control zombies and attack evil humans and turn them into zombies. Featuring music by Keisuke Itoh, of noisycroak, and Soyo Oka, of Super Mario Kart fame, it manages to capture a very unique atmosphere, through its use of chiptune and synthesized instrumentation. In the end, how does it turn out?

The majority of the soundtrack is composed by Keisuki Itoh, but Soyo Oka contributes a few key themes as well. "Opening" is a short orchestral opening theme that features a playful, but semi-sinister carnival atmosphere. "Prologue" has a very smoky jazz atmosphere, mixed with some more classically and romantically inspired piano passages. It's one of her strongest themes on the soundtrack and I would love to see an expanded version of this theme. "Marty McWeapon's Death" is an organ piece that gives off a very somber atmosphere. It's a fitting requiem style track and although slow to start, I really like the orchestral swells that accompany the organ in the latter half of the piece.

A chiptune track, "Our Ranch," gives off a bit of a storybook soundscape initially. As it progresses, the melody becomes much more upbeat and happy, reminding me, in a way, of the more upbeat music from the early Super Mario games for the Nintendo Entertainment System. It's probably my favorite track from Soyo Oka on this soundtrack. "Our Ranch Back Again" is a re-interpretation of this theme featuring synthesized instruments. Through the use of xylophone and accordion, it manages to give off a Parisian air. It's definitely nice, but the chiptune version manages to capture my heart a bit more. Lastly, "Epilogue" closes off Soyo Oka's contributions. Although the introduction starts off the same as "Opening," it quickly becomes an intense militaristic orchestral interpretation of this same motif, featuring heroic brass tones and beautiful orchestral swells while giving off a great sense of accomplishment.

As mentioned before, Keisuke Itoh is responsible for the majority of the soundtrack. "Hell Begin" is a chiptune track that gives off a horror vibe through its mysterious melody and foreboding accompaniment. "Happy Zombie" is a jazzy chiptune track that definitely gives off a playful, uplifting atmosphere. As it progresses, the B section takes a much more sinister turn, providing a haunting atmosphere that contrasts nicely with the A section's more jovial nature. "The Soul is Eternal" is an up-tempo version of this same theme. "Noisy Zombie" is a very adventurous chiptune track that gives off a bit of a carnival vibe, particularly through its accompaniment, especially in the A section. The B section is a bit more atmospheric, relying a bit less on melody initially, before turning back into a more adventurous tone. "Hellfire of Revenge" is an up-tempo version of this same theme.

"Goodnight Zombie" is a chiptune track with a very haunting, mysterious, and lullaby-esque atmosphere. As the theme progresses, I sense a bit more determination in the melody before turning a bit more ominous in nature. It's one of my favorite of the Zombie themes. As with the other tracks, there is an up-tempo version of this theme and is called "Champion of the Night." As soon as the theme "Clingy Zombie" starts up, the first image that comes to my mind is an early NES RPG. It has a very heroic, almost battle-like quality to it, but also manages to throw in some beautiful classical elements as well as some mysterious tones as well. In retrospect, it has a very Dragon Quest quality to it mixed with a bit of Final Fantasy, making for a very solid theme. "Wedge of Life" is the uptempo version of this theme.

"Faint Zombie" is another intriguing composition. It combines a bit of a Renaissance atmosphere with the more playful carnival elements that weave their way through this soundtrack. What makes this very interesting though is how it reminds me of "The Phantom Forest" from Final Fantasy VI. It's a wonderfully atmospheric piece with a very strong melody to help it. "Sobbing Voice" would be its up-tempo rendition. "Zombie Step," on the other hand, is very reminiscent of a waltz. It has a very classical quality to it, but at the same time, I really like the wispy nature of the woodwinds. It's one of the more light-hearted zombie themes and helps add some nice diversity to the soundtrack. "Stomp of Rage" is the up-tempo version of this theme.

Another heroic theme comes in the form of "Lost Zombie." It manages to capture a very adventurous tone to it and imparts a feeling of discovery. I'm not sure the name goes with the music, but I guess it can be interpreted as such if they do get lost on an adventure. "A Future of Despair" would be its up-tempo version. Another favorite of mine would be "Plain Zombie." I really like how this one combines synthesized woodwinds and chiptune to create a very endearing combination. Particularly enjoyable is how the woodwind and chiptune take turns with the melody, providing a very rich contrast that gives off a sense of adventure and a bit of a Wild West sound. Until now, I thought of "Plain Zombie" as normal, but perhaps it really is indeed a cowboy style zombie (I haven't played the game), given the soundscape of the piece. The up-tempo version of this theme is "The Ends of a Grudge."

"Swift Zombie" features a Castlevania-inspired soundscape. Sinister accompaniment works very well to bolster the mysterious melody line, providing both by woodwinds and chiptune. It's another solid theme, in my opinion, and really captures what most people would think when they hear the word "zombie." "Strikes of Resentment" would be the up-tempo version. Of all the zombie themes, "Raging Zombie" is definitely my favorite. It's an intriguing composition because the A section is definitely more gothic in nature, providing a very beautiful piece, whereas the B section manages to mix in some more dreamy, heroic qualities into the composition. "The Crowds are a Battleground" would be the up-tempo version of this theme.

There are two more zombie tracks on the soundtrack, both unique and without up-tempo counterparts. The first, "Space Zombie," is definitely another one of my favorites. It has a Rockman quality to it, with its beautiful, futuristic melody and upbeat accompaniment. Sung by Yu Inoue, "Love Zombie?" closes the album. It has a very Hawaiian atmosphere, in my opinion, due to the ukulele. There are some woodwind, accordion, and plucked string accompaniment to help support the ukulele. It's a very cute theme that fits the name of the game, which translates to "I Love Zombies" and even ends with the name of the game as its final notes.

This is definitely a soundtrack that will be considered a hidden gem of 2011. While there are some filler tracks and up-tempo versions of most of the zombie themes, the compositions are quite solid and provide an extremely diverse array of soundscapes, incorporating chiptune and synthesizer to create wonderful fusions of sounds. Both Soyo Oka and Keisuke Itoh did a great job at capturing both the sinister aspects of zombies as well as the more playful interpretation of them based on the game's title. I would love to see a Zombie Daisuki Arrange Album given the plethora of styles. It would make for some very nice interpretations with the right composers on board. If you like chiptune music inspired by classic NES titles, this is definitely worth a look!

M48 performed by Yu Inoue (井上 侑)
Album was composed by Keisuke Itoh / Soyo Oka and was released on June 22, 2011. Soundtrack consists of 48 tracks tracks with duration over . Album was released by noisycroak Records.