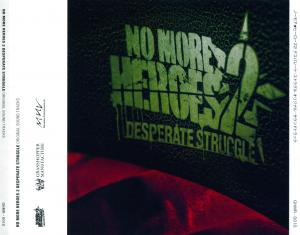 During 2009 and 2010, there was quite a bit of shuffling between the leading mainstream game composers in Japan. No More Heroes' Masafumi Takada left Grasshopper Manufacture to pursue developments with Shinji Mikami and was eventually replaced by a Konami departee, Silent Hill's Akira Yamaoka. During the interim, the soundtrack for No More Heroes 2: Desperate Struggle was produced, largely in the absence of either major name. Instead the remaining sound team of Grasshopper Manufacture collaborated with a range of guest musicians to produce a score jam-packed with artist-produced music in various alternative styles. The soundtrack successfully builds on the thematic and stylistic foundations of No More Heroes' score while taking an even more cutting-edge approach. Now that the game has been at last released in Japan, Grasshopper Manufacture have released the game's three disc soundtrack both domestically and overseas for listeners to behold on a stand-alone level.

Guest artists The Riot -Teens of Anger- help to define the score with No More Heroes 2: Desperate Struggle with several particularly effective opening and ending themes. After an ambient scene-setting introduction, "Sonic Smooth" captures Travis' sense of vengeance with its slow brooding electric guitar passages; it's among the more understated tracks on the soundtrack, but reflects both the emotions and scenery of the opening perfectly. Subsequently "Sling Shot" unleashes action with a blend of adventurous surf-style rock and more malicious sections, setting precedent for a range of excellent action themes. As the credits roll, "No More No" inspires a bittersweet reminisce with its duetting Japanese vocals and wailing electric guitars, before "Do you want more!" offers a more anthemic jam to round off the experience. These tracks set the precedent for many other stylish and emotional performances from internal and guest artists alike...

Once again, Masafumi Takada's incredibly catchy and quirky main theme is featured in the No More Heroes 2: Desperate Struggle soundtrack. Whereas the arrangements of the theme were often too numerous and repetitive on the original game soundtrack, the arrangements here are all novel and fascinating. The most notable are actually directly sourced from the arranged album No More Heroes Soundtracks Dark Side, namely The Outer Rim's hard jazz improvisation, Yoshioka Taku Squad's acid jazz vocalisation, and The Riot's aggressive rock performance. This will make the arranged album somewhat redundant — to the detriment of those who already own it — yet their appearances are still welcome for two reasons. For one, these tracks are wonderfully integrated into the game for special battles despite their original purpose. What's more, each one is fantastically arranged and performed — proving to be unparalleled within the field of game music and pioneering even outside it.

The diversity of the soundtrack is increased by a range of original contributions by guest artists. For example, Taku Yoshioka's collaboration with J-Rapper IGARASHI ensures a colourful if abstract depiction of Nathan Copeland; while it won't appeal to all, its impressive how this track manages to sound compelling without taking itself too seriously. Among the techno-based contributions, Hondalady make a big impact both in and out of context with the electrifying battle theme "Sub crazy" and the more experimental vocal-dominated "Philistine". Neutrino also produce a colourful assortment of rock-influenced battle music, including the trio of themes to represent Jesper Batt Jr. at the climax; "Travesty" is especially persuasive with its hard-edged rhythm guitar riffs, capturing Travis at his most vengeful while retaining a sense of fun and coolness. Among the electronic artists featured, Hondalady Other delightful contributions include Convex Rebel's "With You, Without You" with its infectious Jackson-influenced rhythm guitar riffs and Keiichi Sugiyama's "The Upside" with its warm expansive synthpads.

The contributions by the remaining Grasshopper Manufacture sound team are comparatively modest in both concept and length, having more in common with game music than artist records. Tracks such as "Cheep Whiskey" or "Pi Pa Po" all feature contemporary stylings like the contributions by guest artists; however, they don't develop as expansively or ambitiously, given they were composed with the loop in mind. They're great, just not breathtaking. Such understated tracks are still essential for bonding the game's scenes and soundtrack's pieces together, just like similar tracks on No More Heroes. Nevertheless, internally composed tracks such as the surreal piano-based "Sleepy House Over Yonder", bizarre beat-heavy "Sound's Asylum", and distorted Prodigy-inspired "Happy War More" all make a giant impact in the particular contexts they are used. Probably the most notable contributions, however, are latecomer Akira Yamaoka's themes for Matt Helms and Alice Twilight. The blend of guitar riffs and electronic beats featured in both tracks is characteristic of an experienced artist with a refined individualistic style.

The third disc of the score is almost entirely dedicated to the various jingles and short pieces composed for subsidiary tracks. Even in these tracks, Jun Fukuda shows enormous attention to detail and carefully maintains the 'cool yet alternative' image of the rest of the production. The majority of these tracks were actually produced entirely with chiptunes and mix influences from classic game music with those of contemporary chip artists. There are too many short tracks to be enjoyed en masse, but there are a number of individual stand-alone highlights nonetheless. Particularly enjoyable are "Metro Syndrome" with its nostalgic classically-tinged melodies, "Coconut Addiction" with its compelling funky rhythms, and "Malditos Insectos" with its bold authentic synthesis. However, Fukuda saves his magnum opus for "PURE-WHITE TINY GLASTONBURY", an elating blend of hyperactive chiptunes and vocals that previously from the Dark Side album. Overall, this disc is basically a bonus but features a few goodies nevertheless.

Overall, the soundtrack for No More Heroes 2: Desperate Struggle exceeds the already accomplished original in every way. Aside the bonus disc, essentially every track in the main soundtrack is effective in context and fulfilling on a number of levels outside it. Masafumi Takada's absence is certainly conspicuous, as the soundtrack doesn't come together quite as cohesively as No More Heroes. Yet the guest artists hired in his place all bring plenty of style, attitude, and charisma to the soundtrack, ensuring the individual pieces are fantastic listens, and the internal sound team also put considerable effort into unifying the experience. The overall soundtrack certainly features most cutting-edge artist-produced music in any game and the overall effect is mind-blowing. Available at a good price through Grasshopper Manufacture's Facebook store in the West, this soundtrack is worth a place in the collections of those looking for alternative yet accessible music.

Autographed copies by Akira Yamaoka were pre-released at the venue of HOPPER'S 4 (Oct 21st). 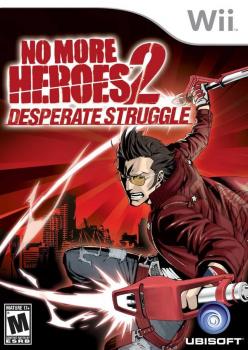