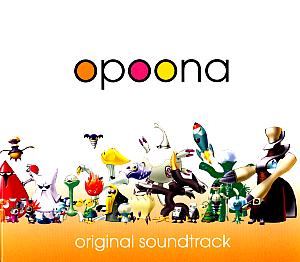 It took three years, but at the insistent request of fans, the niche Wii title Opoona finally received an official soundtrack release at the end of 2010. The soundtrack was an unprecedented effort for Hitoshi Sakimoto's production company Basiscape, featuring all six composers at the company at that time. The composers managed to blend orchestral and acoustic performances, courtesy of Eminence, with various electronic and experimental stylings to capture a light-hearted, personal, yet otherworldly feel to the title. Hailed by many players of the game as one of Basiscape's best works to date, how does the soundtrack now fare, available on physical media for the first time?

The defining composition of the soundtrack, and indeed Hitoshi Sakimoto's central contribution as a whole, is the game's main theme. The theme is whimsical and delightful, exactly as one would expect given the nature of the game; in fact, it is reminiscent of other of Sakimoto's similarly playful themes, found in works such as Deltora Quest, with its unconventional sense of lyricism. It's short, but it doesn't need to be long to be memorable and fitting. Its length allows it the malleability to be worked into themes all over the soundtrack, some by Sakimoto himself and others by Basiscape. Among the most remarkable interpretations include its cinematic exposition at the start of the soundtrack and the more elaborate fairytale orchestration — aptly titled "Main Theme" — on the second disc.

Noriyuki Kamikura provides what is perhaps the best arrangement of the theme, in his "Tokione". With its blend of addictive techno beats and ethereal piano passages, it is perfectly indicative of the soundtrack as a whole, more than Sakimoto's relatively orchestrational original theme lets on. Of course, "Tokione" isn't just a rehash of the main theme, though it is incorporated into the track quite satisfactorily. "Children of Tokione," arranged by Mitsuhiro Kaneda, focuses primarily on the theme, and, though while quite interesting and whistleable, uses a bit too much of a playful techno arrangement to be as accessible as the aforementioned. Kamikura also arranged Sakimoto's theme for "Creola's House," an absolutely delightful piece with a perfectly placed, mournful violin that complements the otherwise silly tone of the piece.

It's clear that the artists were fully liberated creatively when creating the various major secondary themes on the soundtrack. "Holy Wilds" is quite fantastic melodically — reminiscent of Iwata's powerful works; though its initial version is rather short, a version arranged by Namiki, "Paradiso," elaborates on the melody with a slightly more techno style without sacrificing the melody. Kamikura's "Concert Hall" and "Back Stage" are among the most beautiful electro-acoustic fusions present on the soundtrack. The composition and arrangement of the material in the former is vivid and enjoyable, replete with complex woodwind counterpoint and elegantly mixed techno. The latter, meanwhile, is a brilliantly subdued version of the former by Kaneda, featuring more than just a simple filter layered over the original material, instead being a full rearrangement.

More melodies on this album get multiple arrangements. Immediately after the previous group comes three tracks: "A Walk in the Sea," "Intelligent Sea" and "Bravo," all originally composed by Kaneda and the latter two arranged by Manabu Namiki and Masaharu Iwata. The original track pleasantly makes one think of the ocean thanks to the steel guitar and piano, and gentle, soothing percussion, while the two arranges are each more creative and techno infused than the last. Iwata's in particular sounds a bit like a departure of form, due to its addictive beat, but the orchestration is very reminiscent of his works. Certainly, the recurrence of several memorable themes throughout the soundtrack makes it all the more accessible and meaningful.

"Warriors of Tizia" is the game's battle theme. Composed by Sakimoto, this theme complements his main theme in a rather fulfilling fashion. Featuring not a hint of the techno that pervades so much of this album, this piece easily fits right in amongst the others with its overly exuberant and addictive playfulness. The piece is short and resembles circus music a little too strongly, but it works. Of course, other composers infuse this theme with techno elements. Kamikura's "Dark Rouge" is a particularly frantic, frenzied affair thanks to the brass-focused arrangement. However, easily the highlight among the battle themes is "Partizans", a heroic blend of the main theme and battle theme with some new melodic elements added by the arranger to augment the fact that the game's conclusion is around the corner. The anthemic section from 0:31 is one of the defining moments of the entire album.

Though the majority of the soundtrack has a frivolous tone, there are a range of more mature additions to the soundtrack too. One particularly gorgeous composition is "Cathedral", which showcases Kaneda's strengths in composition quite fluidly. It starts innocuously with a melody on the piano and some soft techno sounds floating in the background, but everything develops quite fantastically and opens up into a rather satisfying piece. Kamikura's "The Village Without Memories" melds the soundtracks playful techno with an insightfully profound melody and the composer's earlier used mournful violin to create something that sounds not entirely unlike a composition of Go Shiina's. "Old Sanctuary" doesn't feature any sort of techno at all, though its light orchestration focusing on the woodwinds, reminds the listener of the overall playfulness of the album, despite the sad melody.

Journeying on deeper into Opoona's world, Masaharu Iwata's "Ruins in the Wilderness" is somewhat of an atmospheric piece: while it is rather complex, the piece itself takes a while to get anywhere melodically. Still, there's more than enough going on to take hold of the listener's attention for the track's lengthy playtime. Speaking of the composer, "Central Sea" is a soothing techno piece that opts for relatively lengthy soundscapes to portray the sea, while "Blue Desert Hotel" features vivacious instrumentation that is a delight to trace throughout repeated listens. Kimihiro Abe's "Great Dunes" uses some abstract melodies and soundscapes, as well as an accordion, to create a piece that might not be liked by all, but certainly will evoke the curiosity of many. The rhythm idiosyncracies typical of Abe's work are very pronounced here and the elaborate development has a particularly enigmatic quality.

There are a range of much darker tracks that dominate the final disc of the soundtrack. Kamikura's "Earth Prison," while extremely neat in context, gets rather irritating quickly due to the somewhat obnoxious sound effects playing ad nauseum in the background. "Rock Castle" is similarly unsettling, though is a more powerful than the aforementioned due to its richer orchestration. Kimihiro Abe's "Ancient Ruins" and "Holy Spring" obesessively repeat an eerie motif to develop tension. The former is entirely soothing due to its continued focus on warm electro-acoustic soundscapes, though certain textures are particularly abstract here. Namiki's variation features a chilling use of soprano, made more profound by Abe's powerful melody and various electronic manipulation. The subdued nature of the accompanying instrumentation, featuring not much more than an organ, helps augment this feel.

To create a unique and otherworldly ambience in the final dungeon, Hitoshi Sakimoto and Masaaki Kaneko blended all sorts of percussion samples and sound effects into "Den of Darkness" to incredible effect. For the final battles, Kaneda arranged "Dark Fate," a variation of the battle theme even more frenzied than Kamikura's first. This theme seems to utilize Sakimoto's original, merely layering techno beats and the like over it while adding a few new sections, including one with some frantic strings. "Babushca," the final battle theme composed by Sakimoto, is entirely expected for the composer. Perhaps most similar to the battle themes in Valkyria Chronicles due to its highly dissonant orchestration and usage of choir singing staccato to set a dark mood, this theme is somewhat unremarkable, if only because it's so typical for Sakimoto. However, the ending theme, "Good Luck," is an entirely fulfilling composition by Sakimoto. Utilizing the main theme in a playful techno arrangement, this is the perfect closing cue.

Once again, the Basiscape team has shown off their incredible ability to create a comprehensive three disc album. It's one that constantly feels fresh and new, yet one whose pieces all work together surprisingly well, especially considering the number of composers and arrangers involved. Every composer brings something new to the table, but without a listing of who did what, the listener would have difficulty telling them all apart. This album focused on hybridising techno and acoustic samples into a playful and abstract manner, and entirely fulfilled its goal. Such a sound will not be pleasing to all, and some might find it rambunctious and silly, but there's an incredible amount of depth and complexity in each piece that should not be missed by any lover of game music. Now it's at last been released in soundtrack form, I consider it a must-have. 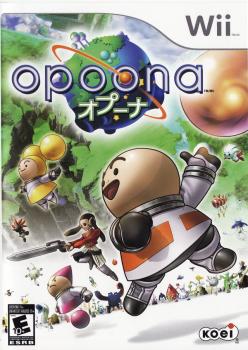