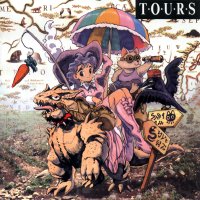 TOURS is a concept album feature numerous composers associated with the Troubadour record label. Each composition on the album was inspired by a special illustration featured in the booklet accompanying the album. However, they do not seem to tell a story collectively in contrast to earlier instalments in the series. The scenes depicted by the illustrations are quite broad and correspondingly the music is stylistically diverse too. It seems quite a few composers, such as Hitoshi Sakimoto and Hiroto Sasaki, used it as an opportunity to experiment and refine their work with certain styles. Let's take a closer look at one of Troubadour's most poignant efforts...

Hayato Matsuo's "Mindful of Midnight Flying" is inspired by an illustration of a girl being taken on a night flight by a male fairy. The opening two minutes create suitably dreamy atmosphere for the girl's fantasy with a gorgeous electric piano solo and ethereal synth pads. There is a transition to an upbeat section at the two minute mark that captures the girl's excitement while flying; it is rich with Matsuo's funky rhythms found in earlier albums, though the unusual soundscaping reflects that it is still a dream. Motoaki Takenouchi's "Unparalleled" also features funk and rock elements, but is much harder and minimalistic to depict malevolence emerging from the shadows. Great job, but the horror elements won't always be welcome. The only song on the album, "Icy Corridor", features the duo Nympheás to represent two girls journeying through a futuristic setting. The warm yet detached instrumentals suitably establish the icy and feminine elements of the illustration, though the mild vocals by Hiroto Sasaki and Eriko Yamaguchi lack the tone needed to really inspire listeners and sometimes sound poorly intonated.

Taking a tour of a few other additions on the album, Hitoshi Sakimoto demonstrates his love for horse-riding on "Go for a Gallop". Whereas previous Troubadour albums focused on his electronic and piano works, this contribution reflects how he established himself as an orchestral composer on 1993's Ogre Battle: March of the Black Queen. A lot of his trademarks are confidently presented during the grandiose opening and whimsical development even if the classical influences are a little stronger than unusual. Naoko Mikami's "Intercept Summer" is a nostalgic interpretation of girls playing during the summer. At the core of the composition is explorative solo piano and, while the instrument is synthesized, it is impressive just how much humanity is contained within every note. Kenichi Koyano's "Portrait" is also especially relaxing with its piano-based smooth jazz while Ayako Saso's "Blue" is an early example of the soothing tropical style she elaborated upon in the Everblue series. It's fantastic how collaborative albums like these allow one to trace the routes of the development of a composer's musicality.

Once again, album co-directors Shinji Hosoe and Takayuki Aihara make the largest number of contributions to the album. Aihara's "Distant" complements an illustration of a girl on holiday with sections dedicated to relaxing solo piano work and exotic big band infusions. Hosoe's "Fine Weather Day" accompanies a picture of boys rafting on a summer's day with a rich expansive synth melody and unobstrusive backing. "Miniman Traveres" is also a fun contribution from him with synthpop vibes. Aihara leads the album out with two of the finest tracks. "Over the Paradise" is a fantastical orchestration used to portray an illustration of a man floating over water; there are the composer's characteristic brassy fanfares in conjunction with more gentle sections that create a feeling of ascension. "Midsummer Emotion", also featured on Generate, seems to sum up a lot of the emotions felt on the album. Its catchy melodies and improvisations recapture that superficial 'feel good' feeling created by certain earlier tracks. However, a lot of sections feature very warm and smooth soundscaping too to reinforce the dreamy feel of the overall album.

TOURS is another enjoyable collaborative album from the Troubadour line. There is a nice mixture of catchy upbeat tracks, soothing synthy ambience, and the occasional bold orchestration. A couple of tracks disrupt the flow, however, notably "Unparalleled" with its (well done) horror elements and "Icy Corridor" with its lifeless vocals. Although the album doesn't come together quite as well as a collective whole as some preceding Troubadour releases, it compensates with its very creative portrayals of the various illustrations. Given its rarity and pricetag, however, it's probably only worthwhile for those really passionate about the artists featured.