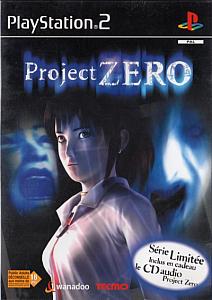 The soundtrack was included with the French limited edition of the game, Project Zero Série Limitée (SLES 50821 PRZ064-JQ), and contains five untitled tracks. It was not released in any other European countries as only France got a limited edition. The soundtrack disc came inside a white paper sleeve placed inside the game box.
Album was composed by and was released on August 30, 2002. Soundtrack consists of tracks with duration over . Album was released by Wanadoo.