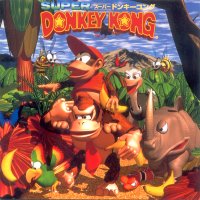 Donkey Kong Country, known in Japan as Super Donkey Kong, was one of the legendary platformers of the Super Nintendo era. It was the first Donkey Kong game not created by Shigeru Miyamoto and was instead designed by British developer Rare. While in few ways innovative, the game was a major success, gaining rave reviews and selling over eight million copies. Led by Dave Wise, the catchy and diverse music for the game was a big part of the overall charm. The soundtrack was released in multiple versions in America, Europe, and Japan, each with their own track listings. One of two Japanese releases, Super Donkey Kong Game Music CD - Jungle Fantasy offers both the game's original music and seven arranged versions.

Inspired by great platformers like Super Mario Bros. and Sonic the Hedgehog before it, David Wise put the emphasis on the Donkey Kong Country on the feature most guaranteed to win listener's hearts: strong melodies. Practically every piece on this soundtrack exudes a certain lyricism that has become a representative feature of Rare's games. There are all sorts of classics and even short and superficial tracks like "Cranky Kong Theme", "Candy Kong Theme", and "Bonus Stage" are highly whistleable all these years later. However, easily the most enjoyable tracks are those such as "Title Screen", "The Map Page", and "Jungle Level" that integrate the series' infectious jazz-influenced main theme for the game. Interestingly, Dave Wise greatly elaborated on Yukio Kameoka's jingle for the original Donkey Kong in these pieces to create a worthy main theme for the series.

That said, the soundtrack is still one with plenty of depth. For example, it's fascinating how the "Jungle Level" evolves from its upbeat tropical introduction into a mystical and haunting piece. It makes the rather expansive locations in the game all the more multifaceted. "Underwater Level" meanwhile is a stunningly beautiful example of soundscaping — David Wise blends the synth pads and percussion in an artful way to achieve a feeling of floating in the sea. While ambient in name and nature, it still features a charismatic synth melody from the 1:25 mark, making it no doubt a favourite with fan arrangers. Further delights come in the form of the unpredictable percussion of "The Caves", the fierce thrust of "Mine Cart Coaster", and the horror scoring of "Tricktrack Lift", all of which pushed the SPC sound chip to the limits.

The action themes on this soundtrack are among the less memorable contributions. "Level Boss" certainly gives the impression of being confronting by a formidable enemy, but also focuses a little too much on a few chord sequences. The final boss theme "King K. Roll's Ship" meanwhile is a little strange for the way it evolves from a sea shanty into an action theme, though it works quite well in context. The rocking climax also secures its place as one of the Super Nintendo's most memorable final battle themes. Intriguingly, this theme is misplaced in the import soundtrack and a number of jingles and stage themes follow it. In SNES tradition, there is also a relieving ending theme, though it's neither as expansive nor memorable to compare with Nintendo or Square favourites.

The album opens with seven mostly exclusive arranged tracks created by Yoshiyuki Ito. Those that have heard her remixes on other Nintendo albums, such as The Legend of Zelda Sound & Drama and Super Metroid Sound in Action, will know what to expect here. She offers relatively faithful renditions of the melodies to the backdrop of poppy beats and clunky keyboards. It will depend very much on the listener whether the disco interpretations of the title theme and Funky's anthem are addictive or unbearable. Likewise listeners will be divided as to whether the synthy interpretations of "Underwater Level" and "Factory Level" are atmospheric or superficial. The arranged section ends with a straightforward rendition of "Jungle Groove", complete with some authentic jungle sound effects.

In summary, Donkey Kong Country features one of the best soundtracks for a platformer. It combines the memorable melodies and rhythmical impetus of classics such as Mario and Sonic with the artistic soundscaping and stylistic diversity that only expert synthesis on the Super Nintendo could offer. The result is a suitable accompaniment to the goofy characters, varied levels, and swinging antics of the game. This soundtrack ought to belong in the collections of all classic game music collectors and this particular domestic version is excellent for revisiting the original music. This import album has more to offer than the various other releases due to the bonus arrangements, though they're frankly not of sufficient quality to be particularly worthwhile and many will be fine sticking with the domestic releases.