The Dark Messiah of Might and Magic Collector's Edition Bonus Disc 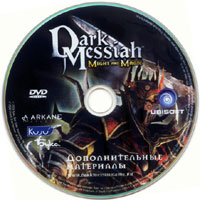 Dark Messiah of Might and Magic Collector's Edition Bonus Disc, The
Передняя обложка

To mark this first foray into first-person shooter land, Dark Messiah's developers decided to break with tradition in more than once sense. And so instead of hiring franchise regulars Paul Romero and Rob King to write Dark Messiah's score, Ubisoft went with another successful and prolific composer duo: Cris Velasco and Sascha Dikiciyan, who had just finished work on Ubisoft's Splinter Cell: Double Agent. Velasco and Dikiciyan took a very conscious approach to shaping Dark Messiah's music and making it a worthy entry into a franchise that has been famous for its impressive scores. In interviews, Dikiciyan and Velasco emphasised how much they aimed to create a unique and instantly recognisable sound for the game that fell outside of the stylistic boundaries of fantasy game music. To reflect the game's more action-laden gameplay and brutal combat, the composers' plan was to merge orchestral and choral sounds — courtesy of Velasco — with harsh electronic and percussive effects created by Dikiciyan. Additionally, according to Velasco, the orchestral material "was often written as if the whole ensemble was a giant percussion section", with the supposed overall effect being a larger-than-life sound with movie-like percussion. Conveying the urgency of a first-person shooter's frantic gameplay, this focus on rhythmic forces also realised Velasco's and Dikiciyan's ambitions to give the music a primitive and ancient quality. To this end, the choir's lyrics were written in the millenia-old language of Sanskrit.

Recording the first 25 minutes of the score with the FILMharmonnic Orchestra and Choir in Prague, Velasco and Dikicyan then started to edit the recorded material and to mix in Dikicyan's industrial sounds. At the end, the composers created about 40 minutes of music for the game. Unfortunately, their work was only made available to the public through a 20 minute score extract on the Bonus DVD that came with the game's Collector's Edition.

Because truth be told, Dark Messiah won't surprise you with music you've never heard before. Yes, it hybridises orchestral sounds with extra layers of percussion and electronica. But there's never any doubt that the symphonic side of things dominates, while the added percussion and synthetic sounds mainly add colour. And yes, Dark Messiah's action tracks are faster and harsher than previous battle cues in the franchise, but their rhythmic impetus isn't very different from many other film and game scores of the last decade. The rhythms and string ostinati that drive tracks like "Crawling from the Deep" and "Avatar of the Goddess" are more Remote Control than Stravinsky and simply aren't savage enough to sound like ancient primitives instead of digital-age Hollywood blockbuster. Add swelling brass figures and crescendoing, sustained violin chords to inject a bit of melody into the piece, and your standard action track is done.

However, within this formula, Dikiciyan and Velasco achieve competent to good results. "Crawling from the Deep" and "Avatar of the Goddess" are all energy and no direction, but at least their orchestral sounds are reasonably densely layered and captured in a satisfying recording and mix. And while particularly "Avatar of the Goddess" suffers from a dominance of only mildly interesting orchestral rhythms, Dikicyan's electronics complement the symphonic elements well. Not only do they increase the music's timbral variety, but they also crank up the tension and give these cues a shot in the arm that they certainly need. Things get better just in time for the album's showdown. The heroic brass material on "Wings of Destruction" is more elaborate than on earlier tracks and the piece is more imposing as a result. Also, Velasco spices up the orchestrations through wavering, piercing trumpet calls that make the piece an even more rousing call to action. The final action track "Summoning the Soul-Dragon" caps the proceedings off nicely through the inclusion of a full choir, whose dignified melodies clash effectively with the agitated orchestral rhythms underneath. Pity that it's all over after a good 90 seconds — a problem that haunts other compositions on this short album as well.

Another reason why Dark Messiah won't pound you into the ground as much as Velasco's and Dikiciyan's statements might suggest is the surprisingly big number of quieter, slower tracks on the album. These fall into two categories: the less interesting compositions are those that are of a more mood-setting nature. Expect sustained, tense chords from the different sections of the string orchestra, ominously pounding timpani ("Redskull Island") and dark, dissonant underscore that eventually comes to the boil on "The Dark Messiah", although without making too much of an impact. Again, these pieces, particularly "The Dark Messiah", would have benefited from a longer running time to explore their moody ambiances in more depth. But these tracks get the job done and effectively slow down the album's pace before the next action track hits you. And there are still some nice details to behold, like the harp melody at the end of "Redskull Island" that gives the music a touch of Vagrant Story's subdued tension music. The removed, eerie choir vocals on "The Dark Messiah" are another deft brush stroke.

Altogether more memorable are those cues on Dark Messiah that play to the composers' melodic sensibilities. In fact, one such track gets to open the album on a high note. "The Gates of Stonehelm", despite not even running for a minute and half, makes an impact with its elegant, melancholic string phrases and rich orchestral writing. It's a great, emotional start to the album and promises more drama than the rest of Dark Messiah can actually deliver. But that doesn't change the fact that the return of these string-heavy strains on "Dark Revelation" and "Awakening" provides enough emotional pull to keep the listener intrigued between the raging battle cues and restrained interludes. Both tracks tone down the lush nature of "The Gates of Stonehelm" and present the string material in sparser form, but this is entirely in tune with the soundtrack's generally downcast mood and makes the pieces no less convincing. On these cues, the only instance of marked augmentation of orchestral sounds occurs on "Leana's Theme", whose harp line and flute melody are given an otherworldly sheen through the application of heavy echo effects. Again, the piece's atmosphere is intriguing, but isn't explored in sufficient depth before the next track hurries along.

Dark Messiah of Might and Magic opens a new chapter for the Might and Magic franchise, but not for fantasy scores as a whole. More morose and militant than previous Might and Magic soundtracks, this is a solid score that convinces through its engaging atmosphere that is both consistently gloomy and yet sufficiently varied — a welcome trait that is displayed nicely through the album's well-sequenced track order. The propulsive action tracks range from decent to good and gain some character through the inclusion of exotic percussion effects and electronic sounds, even though both elements rarely play a major role on this soundtrack. And while Dark Messiah's ambient pieces are rather functional, the score's emotional moments, carried by beautifully written string melodies, provide some of the album's highlights.

One wishes for a more complete soundtrack presentation — tracks end sooner than you'd like and you hear next to nothing of the evolving character themes that Velasco mentioned in one interview. But Dark Messiah at least combats the problem of short track running time somewhat by playing its cues without breaks, turning the score into a continuous, smoothly flowing 20-minute composition. It's not quintessential and obviously on the short side, but fans of dark fantasy scores will enjoy the Might and Magic series' brief stint in the first-person shooter genre.

The soundtrack was recorded with Prague Philarmonic Orchestra and Choir.