The latest entry in the Ridge Racer series comes from Ridge Racer 3D, a game that utilizes the new effects of the Nintendo 3DS. Featuring music by NBGI employees, as well as contract employees from other companies, such as Supersweep and Monaca, how does it compare to the last major entry in the series, Ridge Racer 7?

NBGI newcomer Taku Inoue provides three tunes. The first, "Open Up Your Window," the select menu music, features a jazzy soundscape with an R&B influence, especially given the beats. The synthesizer provides a nice contrast to the organic elements to the theme, such as the drums, acoustic electric guitar, and keyboard tones. "Nitro Right Now" is definitely the best offering by Inoue and also one of the better offerings on the soundtrack. While it is rather simplistic in approach, it really manages to keep the listener entertained through its progression by varying up the beats and adding some fantastic accompaniment, sometimes in the use of ethereal, trancey synthesizer passages or some nice electro-house work. As a friend pointed out to me, some of the electrohouse effects added definitely sound as if they are sped-up acceleration sound effects from the game itself. Lastly, Inoue's ending theme, "Tonight," manages to keep with the jazzy tones and R&B, even incorporating passages heard in "Open Up Your Window" and "Do You Wanna Ride," a short theme from Hiroshi Okubo that opens up the soundtrack. It's a nice theme musically; however, I would have preferred it without the rap vocals. They do fit the soundscape, but I'm just not a big fan of that style of vocal music.

Hiroshi Okubo, a Ridge Racer veteran, provides two substantial themes, in addition to his short rock based themes, "Do You Wanna Ride" and Starting Grid." The first, "Stream of Lights" is very reminiscent of his "Bang the Beat" contribution, in portions, to Nanosweep 9. Opening up with some funky vocal samples, which he incorporates into the theme throughout, it gives off a groovy atmosphere before moving into the more exhilarating electronic theme more in line with a racing game. When the vocal samples and the more exhilarating passages are combined, it really gives of a great vibe, in my opinion, although some people may find the repetitive nature of the vocal samples to be detrimental to the theme. At times, Okubo also slows down the track, providing a very relaxing atmosphere, albeit only shortly, before moving into some slick synthesizer sections that really have a nice warbling effect, and when combined with the aforementioned vocal samples and driving electronica soundscapes, makes for a winning trifecta. His second theme, "Burn Up the Road," is definitely the weaker of his two contributions, but it's definitely a fun theme. It's a funky rock theme with some electronic accompaniment that manages to capture that feeling of driving fast. It's a nice theme, but does manage to drag on a bit as the theme progresses, although the subtle deviations in the accompaniment really do help the theme overall.

Ryo Watanabe, of NBGI, contributes a single theme, "Phantasize," to the soundtrack. It's an exhilarating theme that has a nice tempo, some wonderful synthesizer passages and electronic hooks, a bit of an industrial influence in the accompaniment, and includes ample use of vocoder. The resulting soundscape is one that really fits the atmosphere of a racing game, but also manages to stay in line with Watanabe's Nanosweep soundscapes. The other single contributor from NBGI is LindaAI-CUE. His track, "Aberration," is definitely the most experimental on the soundtrack, providing a very exhilarating, yet frightening atmosphere, through his ample use of industrial tones, distorted electronica, synthesizers, vocal samples, and fast paced electronic beats that really help make this theme more racing game friendly. I can only imagine this is used against really tough opponents. It's a theme that most may not enjoy, due to its jarring nature, but for a racing game, it's a pretty bold theme!

The last member from the NBGI sound team is Rio Hamamoto, whose contributions are definitely more reminiscent of a fighting game, rather than a racing game. "Venomous" is a hard rock track focusing heavily on powerful guitar riffs to create an exhilarating atmosphere and is a prime example of one of the more "fighting game" style tracks I had mentioned before. I can definitely see it working in a racing game, given its energy, but I think it'd be more suitable elsewhere. In addition to the guitar riffs, Hamamoto also adds some Nine Inch Nails inspired industrial beats, which really goes well with the guitar elements. "Heat Shadows" follows in a similar style; however, given its tempo, it has a much darker feel. The electronic elements also echo this atmosphere. While this track is definitely enjoyable, I do find it a mismatch for a racing game and would definitely have been more suited for a Tekken game. Lastly, "Angel Halo," is probably the best of Hamamoto's contributions. As with his other tracks, there is a rock focus, but to me, given this has a definitely J-Rock/Pop combo atmosphere going on, it manages to encapsulate a bit of that racing atmosphere a bit. Both the guitar riffs and guitar melody really work to convey a sense of speed, while the electronic elements help tie it to the predominantly electronic soundscapes provided by the other composers on the soundtrack.

Keiichi Okabe, head of Monaca, contributes a single track to the game as well. Entitled "Rolling Glider," it manages to capture the racing atmosphere quite well. By combining energetic and fast-paced electronic accompaniment with funky, honky-tonk style guitar riffs, it really manages to create a bubbly, sensational soundscape. However, at times, when the electronic components of the track are the sole feature, there is definitely a bit of a darker atmosphere, while keeping the groovy nature of the track intact. Overall, I'd say this is one of the more successful fusion tracks on the soundtrack.

Of course, it wouldn't be Ridge Racer without some help from former Namco employees, Ayako Saso and Shinji Hosoe, using their SamplingsMasters aliases. Ayako Saso provides three extremely solid tracks that definitely incorporate that SamplingsMasters AYA sound. The first, "NOx Warheads," features a steady rave beat with some electric guitar riffs and wails to add some edginess to the track. At the same time, there are some vocal samples, although used sparingly, some distorted and manipulated synthesizer in the melody line, and, perhaps my favorite section of all, before the loop, she incorporates some exotic Indian instrumentation that really combines well with the heavy electronic feel of the overall theme. "Call of Apsara" is a more intense electronic theme with some rock undertones that incorporates more vocal samples, both distorted and heavily processed as well as some more natural sounding ones, particularly of the Native American variety. As with "NOx Warheads," the best part, in my opinion, comes before the loop in the form of an extremely catchy synth melody that would work wonderfully in a Megaman X game. It has a very futuristic, motivating sound and it really serves as a wonderful bridge. Lastly, "My Crazy Chainsaw" is just that. It is probably the most intense of her themes. Opening up with an extremely fast tempo electronic fanfare of sorts, with a bit of a dark touch, it really sets the mood for, what I presume, is a really intense race. The majority of the theme focuses on heavy techno beats and some absolutely crazy gabber vocal samples that really work well with the intense beats. In addition, there are some rock riffs and some great percussion work that really makes for an extremely memorable theme, although some may find it too hardcore for their liking.

Last, but not least, is Shinji Hosoe with three contributions as well. His first, "Psychokinesis," is a combination of quirky synthesizer work, guitar riffs, and more energetic, intense electronic beats. All three major elements of the track work together to create a very bizarre soundscape, but one that definitely carries with it the motivation needed for a racing atmosphere. I particularly enjoy the sections that feature a bit of a cascading trance effect or the "alarm-like" synthesizer work, helping to give off a sense of desperation. My personal favorite is probably "Napalm Sled" and is probably the most engaging of all three themes. Although it still features some intriguing and odd rhythms from time to time, it's a much more straightforward track that really manages to provide a nice, driving sensation due to its focus on tempo and, what sound to me, like distorted sound effects from the game, such as acceleration and even wind as it passes your car. As it progresses, the theme becomes much more intense throwing in some heavier beats and doing some marvelously catchy and off-rhythm things in the melody line. His final track, "Dr. Mad's Gone," is definitely the most intense theme on the entire soundtrack. Featuring Hosoe at his hardcore finest, it's an extremely intense that really creates a chaotic atmosphere through this ample use of vocal samples, industrial tones, distorted sound effects, particularly in the background, and the "all over the place" nature of its "melodic" progression. In the end, it's an extremely satisfying track to fans of this type of Hosoe music but, if you aren't, you'll probably just leave with a headache.

In the end, I think that the Ridge Racer 3D Direct Audio soundtrack manages to sit among my favorite Ridge Racer soundtracks, including Ridge Racer 6 and Ridge Racer 4. While it definitely focuses on a heavier sound, I think it manages to capture the spirit of an intense and difficult race. Fans of Supersweep's previous Ridge Racer contributions will be happy with their contributions here while the NBGI team varies it up quite a bit to offer a little bit of everything from rock to distortion. For those who are more a fan of lighter electronica, this album may not be for you. 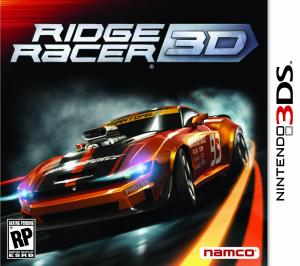