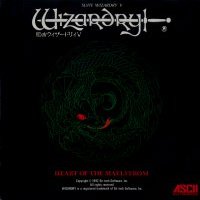 In the late 80s, Kentaro Haneda composed the soundtracks for the first three Wizardry games released in Japan. For unknown reasons, Kentaro Haneda didn't compose music for the fourth game, which was labelled a Gaiden. Instead they hired Ikuro Fujiwara who later composed Wizardry: Dimguil. Wizardry V marked Kentaro Haneda's return to the original series, though the arranged album was crafted by Tamiya Terashima. The original Wizardry albums never had official soundtrack releases. The previous arranged albums are exceptionally good, though I'm sure we could also enjoy the music in its original chiptune. I'm surprised to find that Kentarou Haneda is underrated in the game music community and many people are unaware of his classic Wizardry scores. How does this arranged album compared to the original and other suites with Terashima at the helm? Suite Wizardry V ~ Heart of the Maelstrom is an arranged version of Wizardry V music using synthesizer as its main instrument. Most of the tracks are medleys of Wizardry V original music.

This album could be classified as thematic symphonic suite. Each piece is intended to give a certain impression in a story-like manner. Arrangements might begin slowly before there is a sudden change to change the entire atmosphere. The opening theme is as good as the original Wizardry themes and leaves a memorable impression with its strong main melody It is developed very slowly with a combination of strings and church bell ring to build the intended dramatic atmosphere. The opening theme was also featured in the Orchestra Game Concert 5, though arranged differently.

There are many cinematic epics here. "Preparing for Battle" is composed in militaristic march style. The color of this music is mixed and there is variation between tension and peace. "Going into the Labyrinth" leaves an impression of the heroes entering a creepy labyrinth full of goblins and surprise traps. "Information Gathering" is a cheerful music carried by synthesized accordion. It's lively music, though there are some dissonant passages featured to add some tension here and there.

"Battle and Victory" is self explanatory. A fast tempo and minor key melodies effectively portray a heated battle. The juxtaposition of xylophone is also nicely done. The slower music of "Time for Rest" gives an impression of a warm comfortable inn where characters in RPGs usually rest. This is also very easy to relax to. The album ends with a theme featuring a great contrast of color and probably more optism compared to other Wizardry ending themes. It reuses themes from previous tracks before returning to its main melody.

This album is amazing. All the tracks are arranged wonderfully, almost flawlessly, in an epic and heroic manner. It easily gives listeners images of fantasy heroes venturing a medieval world, fighting off beasts and dark lords to save the world. Maybe the only flaw of this CD is Terashima arranged the tracks as medley when hearing the individual pieces separately would have been enjoyable. Since the arrangements are done very nicely, this isn't much of a complaint. In summary, I really recommend you to take the opportunity to hear this underrated soundtrack. Few people in the game music community know the greatness of Wizardry music. This is one of my favorite CDs all the time. People who are interested to classically-styled music can't possibly miss this breathtaking album.

Album was composed by Кентаро Ханеда and was released on December 16, 1992. Soundtrack consists of tracks with duration over about 50 minutes. Album was released by Apollon.