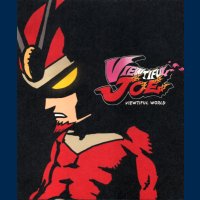 The song "Viewtiful World" was used during the publicity campaign for Viewtiful Joe but not in the game itself. Composed by Do As Infinity's guitarist Dai Nagao, the song blended punk elements, a rhythmic rap-based verse, and a melodic pop-influenced chorus. It was interpreted in three versions for Avex's accompanying single. The song aimed to repeat the success of Devil May Cry's promotional theme "Ring the Noise", but fell short in several ways...

The first section of "Viewtiful World" is rhythmically rather than melodically driven with a mixture of rap and grunge. The rap itself isn't too bad, but the section is nevertheless mind-numbing due to the repetitive supporting bass riffs and cringe-worthy male chorus entry. The chorus offers a clear melody, but is reminiscent of the irritating pop punk sound that Green Day increasingly adopts. Furthermore, it doesn't fit particularly well with the rest of the piece and the transitions to and from the verse are abrupt. The composition offers little beyond that aside some brief dabs of overdriven guitar in the second half.

Perhaps the most problematic aspect of the song is that it has very little relation to the direction of the game otherwise. The grating bass riff and aggressive opening vocals 'This is presented by Viewtiful Joe' don't represent Joe's youthful and goofy character. The generic melodies have no relation to the catchy character themes Masakazu Sugimori created for the game even though some of those would have been more feasible presented on vocals. The style of the track is also nothing like those on the excellent instrumental soundtrack — lacking the bubbly electronic sounds and fun factor that unified the score.

The second version of "Viewtiful World" is the 'around the ground mix'. This offers a thicker accompaniment with more emphasis on the bass riffs and some drum 'n' bass influences. The additional distorted elements are simply hackneyed and the accompaniment quickly becomes too abrasive and repetitive. Perhaps the main problem with this piece is that, while it contains driving elements and a fast tempo, it never seems to have flow or direction. The instrumental version of the original mix only serves to emphasise the repetitive nature of the accompaniment and the thin elements overall. A must skip track.

As a promotional song, "Viewtiful World" is barely acceptable. It might capture the attention of some of the target audience, but doesn't reflect the endearing nature of the game either. It feels like Dai Nagao had little idea about what the game was about and was simply hired to create a straightforward punk song with a few relevant lyrics. As a stand-alone listen, the melody is too weak, the rhythms are too repetitive, and the styles too derivative to be remarkable. There might be an audience of J-Rock listeners than might want to pick this up, even though there are far better vocal singles out there, but the single isn't worthwhile for fans of the game or soundtrack.

Album was composed by D-A-I and was released on July 11, 2003. Soundtrack consists of tracks with duration over about 15 minutes. Album was released by Avex.