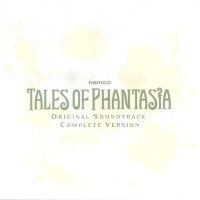 Tales of Phantasia is one of those RPGs that exploit the whole capabilities of the Super Nintendo. One can immediately enjoy the beauty of the graphics as well as the quality of the soundtrack through a unique 'surround' mode which allows you to hear surround sound while playing. That's maybe why Tales of Phantasia has been released on the PlayStation X as well. This game is simply too beautiful. Because of the quality of the SNES version, I will compare it to the Original Soundtrack (i.e. the arranged PlayStation X version released on CD) throughout this review. To give you an overall view of the soundtrack, I'll write about the most noteworthy tracks of the game in chronological order.

The first overworld music you can hear is a real delight. "Mystic Forest" is a slow-paced tune that illustrates harmony and peacefulness as the game starts. The Original Soundtrack version renders a deeper sound, which really fits the atmosphere of the track. "Be Absentminded" is the next tune you may discover in the game. It is a track of sadness astonishingly well-rendered on its SNES version. Motoi Sakuraba and Shinji Tamura use here flute, bass and saxophone over a light guitar melody to express the main characters' emotions. He succeeds in communicating feelings of sadness and hope to the player; when I heard it for the first time I really felt something. I believe the soundtrack is not as good as the original since they replaced the original background guitar with harpsichord-ish one (which does not render the same at all). Paradoxically, "Sylph" is far more beautiful in its Original Soundtrack version. Thanks to the orchestration, the 'loop effect' of the Nintendo background has disappeared and the tune has turned into a powerful sentimental piece of music. It is much the same for "Desolate Road," where there was no boring loop, but the overall song has been rearranged in a smart way and has become a delightful 'journey through the countryside' theme.

What about action? Well, apart from one exception, I think fight music is quite ordinary, and even annoying in some cases like "Open Fire." There is nevertheless an awesome battle music which is called "Fighting of the Spirit." Synth lead, fast-paced harpsichord, synth choir and drums create a rousing piece of music which I'm using to playing loud. Strangely, the Original Soundtrack features a second arranged version. It is no more than a rock and electric guitar version that has lost the atmosphere of the SNES version. One of the characters is a witch named Arche, and she's the live wire of the party. Consequently, "Arche's Theme" is a very nice happiness theme. Generally, I don't like this kind of happy themes but I must admit that this one is very cool. They replaced the main instrument with a sitar in the Original Soundtrack. Overworld themes are not bad either. "Second Act" and "Final Act" are great heroic tunes very well rendered on both versions of the soundtrack. "Raising A Curtain" is interesting but not as good as the other ones.

The next prominent theme, "Mid Galds" (also known as "Midgard") is a tune played in a military town just before war begins. Low bass, low drums, and a brass section render a tense and strong atmosphere. By hearing it, you know the enemy is not far and may attack at any moment. The Original Soundtrack is very interesting since it renders a more apocalyptic atmosphere through a huge and slightly dissonant brass attack at the end of the theme. After the war, you still have to find and catch the Big Boss. Unfortunately, "Castle of the Dhaos" is not a good track. All is a kind of synth 'n' drums jam which is not attractive at all. Maybe this was calculated; when I finally managed to get to the Throne Room, I was so fed up with the music that I craved to wipe Dhaos out so that I could hear something else! he following track, "Triumph" didn't disappoint me; the theme played in each castle of the game is heroic, soft, and fits its title very well. I think the rearrangement is not good at all because the background pulse of the tune has been amplified. They even forgot to cut it during the bridge! Too bad for such a piece of music.

Forward in the quest, you'll probably notice "Abyss of Thor," in which piano, harp, and synth choir render a mysterious and beautiful 'legendary sunken city' theme. Now let's head for the town of Freezekill. It's gently snowing all year long, people gather in warm houses, and you hear this serene music evoking snowflakes falling from the sky. "Freeze" transports you into another reality where time doesn't go by as fast as in ours. This one has become one of my favourite tracks. Totally the opposite of this, "Perverse Religion" is a magnificent organ theme played in the church of Fenrir. This piece of music is comparable to "Decadence of God" from Breath of Fire II. It is short but grand. In the Original Soundtrack, the composer replaced the massive church organ with a softer, less gothic organ. Therefore, the track has lost all the power of the SNES version, which is a great pity. The last town on your quest is a snowy village plunged into darkness and called "Ary." Its slow-paced music sounds like a lullaby and is very nice. The Original Soundtrack features background church bells, which adds a kind of epic atmosphere that destroys the serenity rendered by the SNES version.

The visit to the final dungeon is separated into three tracks that get more and more intense as you climb the stairs of Dhaos' Castle. In the basement "Fulfill Mission," a synth march backed by military drums that renders a feeling of will and perseverance, is played. "Go Over Adversity," where synths and drums go wild, is now introduced, and it evokes both urgency and the fact that the final duel is on the verge to take place. This showdown is illustrated by "Conclusion," which features an unleashed synth improvisation and a neat rousing bridge. For "Conclusion," the Original Soundtrack sounds definitely more evil and better achieved. The farewell tracks, "I Miss You" and "Goodbye Friends" depict the moving ending of the game. From the simple, yet very well used synthesis sounds of the SNES version to the rich rendering of the Original Soundtrack, comes a strong emotion that won't leave you untouched.

Tales of Phantasia Original Soundtrack Complete Version is full of attractive and various themes. I still consider the soundtrack to the first opus of the Tales series as the best collaborative album by Motoi Sakuraba and Shinji Tamura. If you want to fully experience the soundtrack, I advise you to get both the CD and the game rip, since the original soundtrack and the original sound version complete each other. If you even happen to appreciate J-Pop, I also highly advise you to look for the singles released for the opening and ending songs of the game, "The Dream Will not Die" and "Into the Starry Sky."

Album was composed by Мотой Сакураба / Ryota Furuya / Синдзи Тамура and was released on May 21, 1999. Soundtrack consists of tracks with duration over more than 2 hours. Album was released by Victor Entertainment.