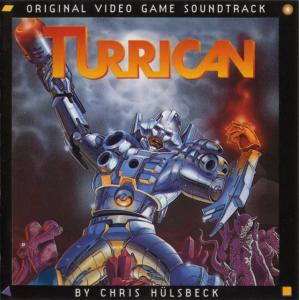 Retro video games are most often associated with Japanese classics. Be it Mario, Sonic, Alex Kidd, they were all the works of Japanese minds. American developers always strived to make games based on licenses or movies and were often forgotten due to lacking quality. Europe was a different beast as developers always tried to blend elements from both sides of the pond, and create their own heroes with the imaginary worlds of the Japanese games and the heroic patriotism shown by American heroes. Even though the mainstream has been in love with the macho space marine ever since the release of Doom in the mid 90's, we Europeans did it first with Turrican. With gameplay being a mix of Contra and Metroid and music by legendary Chris Hülsbeck, it has strangely faded into obscurity today, though often remembered by old timers for its soundtrack.

Turrican will always stand as Chris Hülsbeck's most famous work. While I personally think he has gone on to compose greater soundtracks, such as Jim Power, there is no denying of how influential and great this soundtrack is. The original music was composed in Hülsbeck's own developed format of TFX, which allowed for some amazing sounds on the Amiga and formed the backbone of some of his other famous works like Apidya. This album, however, is an arrangement album which collects music from all Turrican titles and is envisioned as a movie soundtrack and a story, rather than a straightforward sound recording release. The booklet delivers liner notes on each track and the intended atmosphere that they try to build, but it is hardly needed to read as the tracks themselves do a great job at portraying the environment of Turrican. The arrangements often nod to other science fiction works and even other video games at many times across the 60 minute playtime.

This is an instant fact as you hear "Opening". This is an arrangement of the Super Turrican intro sequence and features a sequenced orchestral sound (which Hülsbeck would later revisit for his work on Factor 5's Star Wars games). It has a great sense of battle, with militaristic marching drums and loud crescendos. This track transitions seamlessly into the "Prologue", which is an ambient narration piece, featuring apparently Hülsbeck himself speaking through a voice filter, telling the story of Turrican and the creation of the assault suit. "Main Title" is an arrangement of the title track from Mega Turrican. This has got to be one of the coolest main titles from any game, and this arrangement only helps to reflect this further. With awesome synth layering, intricate percussion, and crazy solos, this track put little limitations upon itself and goes all out.

The album also offers some great up-beat action pieces with "Desert Rocks" and "Bionic Action", which is almost like the music found in old Transformers cartoons with inspiring rock melodies and keyboard solos. "The Great Bath" is the throwaway track on the album, as it differs completely from the rest with a flute-based semi-Celtic sound, while "Walker Factory" makes use of a lot of sound effects and bass drums to give the feel of heavy machinery hitting down. It eventually goes into an ever expanding melody of the Turrican II track and really shows off the benefits of the studio recording, as this track is essentially the same as the one found in game, though sounds absolutely fantastic with proper production and software. "Techno Dungeon" meanwhile mixes old school style keyboard with newer synth software to create some stereotypical "mechanical" sounds. This helps to give it an atmospheric feel along with technological bits to give it a particularly strong science-fiction piece. It's an incredibly melodic piece and the kind of music that you instantly associate with Hülsbeck.

The most surprising part of this CD is probably the latter part, which isn't really music based. Rather this is a sound adventure following the Turrican suit on its mission. "Transfer to the Battlefield", "The Machine", and "Countdown" are combined a ten minute radio drama told entirely through sound. While there are arrangements to be found here backing up the adventure, they are in the style of an orchestral movie score, with throwbacks to the works of John Williams and others. What's really cool about this drama is that there is no actual spoken dialogue by the main character. All you can hear is the surroundings and the creatures that inhabit this planet. When the action comes along, you hear the screams of the aliens, the shots of your gun and music picks up, but never once does anyone with words describe what is happening or what you are seeing. The suit updates you on your suits status and damage but other than that, you are left to truly immerse yourself and see the action that is taking place with your own eyes. It requires a lot of work and thinking to make a sound drama like this work but it successfully does so here. It may not be the best kind of thing to accompany you on a long road trip or for a relaxing session of music, but for the experiment that it is, it's impressive.

The album also offers a remixed version of the Turrican medley found on Shades. It's 15 minutes straight of collected tunes from Turrican and Turrican II; while it doesn't offer anything notably different from the Shades version, it's a wonderfully built synthpop medley where all the tracks are positioned carefully so the progression of the track is always flowing. There's no real point where this medley has to slow down to allow a new theme to start; it always manage to build up between each theme logically.

Turrican was a defining moment for European games. It proved that games could be developed here and match the imagination of the Japanese games and the high quality look of the American games. A large part of the credit goes to the music of Turrican, as the game might have some rough moments, but the music barely has any. The Turrican series' soundtracks remains one of the most well respected to this very day and this album is a great collection of tracks from the series, which are expanded upon, but never lose their old identity despite the facelift. The sound drama might not be everyone's cup of tea, but at ten minutes out of 60, it shouldn't take away any enjoyment from the rest of ride.