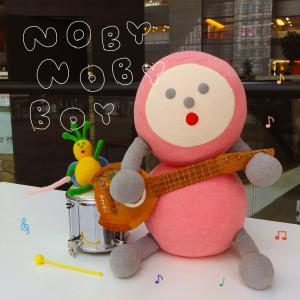 The iPhone and PlayStation 3's Noby Noby Boy is the latest project designed by Keita Takahashi and it was even weirder than his previous effort, Katamari Damacy. The final product fell short of most expectations, including the designer's, though was nevertheless conceptually fascinating and visually stunning. For the soundtrack, a team led by Yu Miyake uniquely focused on offering extended instrumental solos rather than ensemble performances. Every track on the resultant score therefore features a different solo intrument. The soundtrack was eventually released by Namco Sounds through iTunes. While an interesting concept, just like the game, does the soundtrack suffice out of context?

28 tracks on the score are dedicated to solo instrumental performances. Miyake and company tend to focus on plucked strings, tuned percussion, and keyboard instruments. This is probably for two reasons. One, these instruments are capable of harmonising themselves, so listeners won't have to worry about potentially tedious monophonic compositions. Furthermore, they seem to suit the organic qualities of the game more; the acoustic feel created by instruments such as guitar, hammered dulcimer, ukulele, and mandolin especially complement Takahashi's visuals well. The variety and novelty of the score is mainly derived from the timbral qualities of the instruments themselves. Despite each composition being skilfully written for each instrument, they generally share the same core qualities. Almost all tracks on the score have a low-key and unobstrusive feel to them to suit their purpose as background music. However, they're not there to be particularly emotionally captivating or technically dazzling, as would be expected for music intended for stand-alone listening.

From a compositional perspective, all tracks are nevertheless written with the features and qualities of the solo intrument in mind. It's clear that the composers of each track understand what each instrument is capable of and, indeed, the composers are often also the performers. Accordingly, listeners should expect gorgeous chord sequences for folk guitar, authentic punctuation for ragtime guitar, and complex cross-rhythms for conga and djembe, among many other scores. Yet while authentic and competent, the compositions are rarely breathtaking. They are generally complemented by appropriate and polished performances by the instrumentalists involved, all of whom are clearly experts in their respective forces. Jazz guitarist Takashi Ikezawa, blues guitarist Teruyuki Azuma, and multi-percussionist Tamao Fujii especially stand out. The crystal clear recording quality and use of streamed technology also ensures that the performances sound excellent in and out of context.

Noby Noby Boy's soundtrack is nevertheless an underwhelming stand-alone listen for the most part. While the compositions and performances are usually easy to appreciate technically, they are rarely interesting. For example, simple melodies and arpeggio figures sound pretty on folk guitar, but they're not sustainable for long. Likewise, drum solos can only appeal for so long, unless of course a legend like Rony Barrak is playing. What's more, on the iTunes release, many tracks have giant track times of five minutes or more. This would be acceptable if the tracks had obvious direction and diversity during their playtime, but it's not appealing in this case. After all, the majority of the tracks lack any memorable melody, harmony variety, and dramatic arch, so quickly become very tedious. Even some of the more interesting compositions, such as the jazz guitar solo and Yu Miyake's electronic remix, are exhausted by their ten minute playtimes. Even though the album features 34 tracks, it has a total playtime of three hours and this will be difficult for most to stomach in full.

Although there are plenty of underwhelming moments on the score, they're counteracted with some genuinely impressive contributions. Keigo Hoashi's Fender Rhode and Reed Organ contributions have a very appealing jazz emphasis, for example, whereas Kakeru Ishihama and Kazuhiro Nakamura's guitar-based contributions have a more rustic flair to them. Yoshihito Yano's quirky melodica composition and Yu Miyake's dazzling vibraphone improvisation are also some of the more melodic additions to the soundtrack. Some other tracks also have unexpected origins too. The cello performance is based on Bach's Prelude from the Cello Suite No. 1 — a beautiful choice but an overplayed one. More interestingly, Namco classics are revisited in several themes, including Final Furlong, The Tower of Druaga, Libble Rabble, and Shadow Land, generally in suitable arrangements that place sufficient emphasis on their melodies. The guitar-based arrangements of Katamari Damacy favourites "Lonely Rolling Star" and "Cherry-Blossom Color Season" are also nice touches and still retain some of the charisma of their originals.

Both ends of the soundtrack are flanked with some more deviant contributions. "Noby Noby Opening Theme" opens the soundtrack on a fairly humorous note with a march featuring just tuba, snares, and bass drum. "The Theme of Noby Noby Boy" mixes the brass focus with a silly and zany vibe reminiscent of the Katamari Damacy series. There are even childish vocals singing 'Noby Noby Noby Noby Boyyyy', though they grow very repetitive after a while. At the end of the soundtrack, there is another tuba-led march in "Noby Noby Closing Theme" and a sentimental music box performance in "The Theme of Noby Noby Girl", though both are somewhat underwhelming. "Noby Noby Machine" is far more interesting — an (over)extended ambient electronic mix by Yu Miyake featuring samples from his legendary Ridge Racer 6 piece "Acid Eutron #001" — while "Manual Metro Cross" provides a welcome dab of chiptune music. The final additions to the iTunes release are a promotion video and a digital booklet featuring the sheet music from Katamari Damacy's "Cherry-Blossom Color Season".

Overall, the Noby Noby Boy Original Soundtrack is unlike any other video game soundtrack out there due to its focus on solo performances. Yet while the compositions and performances sound skilful and authentic, rarely are they particularly interesting and inspiring. It's very clear that the majority of the tracks were created simply as unobtrusive and atmospheric background music, albeit of the sort curiously juxtaposed with trippy visuals and gameplay. Only a few tracks therefore stand out on a stand-alone release and the collective listen requires considerable endurance. Nonetheless, the soundtrack is an interesting one and might still appeal to certain consumers out there. Given how cheap it is on the iTunes Store, it is still worth serious consideration.

Tracks 31 and 35 and the digital booklet are album-only.