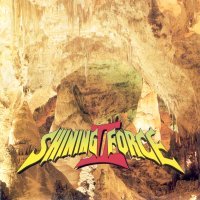 The Shining Force II Symphonic Suite -Ancient Sealing- features arranged pieces from the Genesis' influential strategy RPG Shining Force II. The game's composer, Motoaki Takenouchi — one of Koichi Sugiyama's disciples — arranged all the tracks selected for the suite for orchestra and other soloists. The resultant release compares favourably to similar productions dedicated to Dragon Quest and Final Fantasy, and is privileged with a place in the hall of great arranged albums.

The grandiose sounds of "Warrior of the Reviving Light" introduce this soundtrack. The piece portrays a mood of simple joy through its melody — based on the game's unforgettable main theme — but its presentation is hard to dislike. The orchestration here is classical and refined, and there is enough variety during the playtime to yield a satisfying listen. "The Warrior's Awakening" is the longest track on the disc, and it uses its time wisely, building slowly upon a dramatic motif — a twist on the main theme — heard in its opening. The orchestration is constantly switched around while the melody doesn't stray too far, ensuring that the piece remains both interesting and recognizable to the listener. It is clear that Takenouchi was influenced by modernist composers when writing this one and he takes listeners on quite a journey.

The jazzy tones of "Welcome to our Town" contrast greatly with the preceding pieces, to great effect. The soft melody is presented on a soprano saxophone — a daring decision for a symphonic suite, but one that works thanks to excellent part-writing and a charismatic performance. The lively orchestration and intricate developments help to rapt the listener's attention all the way through. "Dwarf" is also a rather silly piece, utilizing childish instrumentation, including pizzicato strings and the oboe passages. The flute plays some fun jazz sections as well, making for a delightfully quaint piece that doesn't stay past its welcome. Once again, the performances breathe life into an already inspired arrangement.

"Wings" is a far more serious track. In fact, it takes the form of a piano concerto and, with its exuberant frills and dazzling falls, is almost as impressive as Rachmaninoff's most romantic pieces. The instruments certainly hold their own weight — the piece is often epic-sounding thanks to the lofty orchestration — but the piano is definitely the star here. It's also worth noting that the piece extensively integrates the main theme, providing a new perspective on the track while telling a continuous story. Another aural wonder is "Princess Ellis". A soft harp introduces the piece, though it isn't until the entrance of the flute that the piece starts to shine. Soon a violin is introduced to repeat the melody, with the flute playing a wonderful counterpoint. The whole orchestra joins in at the halfway point, ensuring a magnificent finale.

"People of the Demon World," in contrast to the other pieces on the album, is rather unsettling. It starts with silent, striking chords then exploding into a chromatic wonder that keeps the listener on the edge of his or her seat. "The Devil's Advent" follows a similar progression, though its chromaticisms are even more explicit — and, in some ways more enjoyable. Though the piece has no real melodic development to speak of, it intensifies the climax of the album considerably. A rare low point on the album, "Caravan" is more celebratory and exciting, though mostly uninteresting melodically, featuring a melody that is too belligerently happy to be quietly enjoyed. The concluding piece, aptly named "Finale," worthily befits that title with its sweeping strings and ecstatic melody. The track is boisterously happy, yet not quite overbearingly so. The ending is a bit abrupt, though overall the piece is a satisfying conclusion to the whole.

Overall, this symphonic suite is an impressive adaptation of the music of Shining Force II. There are a few tracks that are less interesting melodically than others, though the album's intelligent orchestration and programmatic development helps to make these enjoyable all the same. Motoaki Takenouchi certainly proved his capacity to produce exuberant orchestral pieces here and the album should be accessible to anyone that enjoys symphonic suites based on RPGs.

Album was composed by Мотоаки Такэноти and was released on October 27, 1993. Soundtrack consists of tracks with duration over about 55 minutes. Album was released by Pioneer LDC.