Symphonic Suite the Another Story of Shining Force 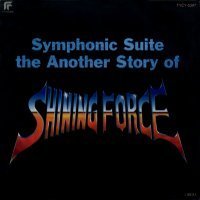 Shining Force, Symphonic Suite the Another Story of
Передняя обложка

The album opens with the only live performance featured, "Another Story of Shining Force." The piece is quite lengthy, and goes through many permutations, starting off rather virulently and continuing into a rather serene piece. Soon a main theme begins, with trumpets blaring in a rather pleasant fashion, reminiscent of the olden days of RPG music. Just like the game itself, the theme too begins to take a more sinister turn, portraying a warped version of the previous melody. The track ends with a boisterous, lively melody. It is definitely reminiscent of the Shining Force II suite with its rich orchestration and performance, even if it doesn't quite reach the same heights.

The switch to synthesizers for "Door to Adventure" is rather obvious. Though their quality is still rather high, the synthesizers aren't as striking or impressive as the full orchestra featured in the previous track. The melody is introduced in the track's first minute, and goes through some interesting changes in its orchestration to liven up the track. It certainly develops the story underlying the album. "The Brave Ones of Cypress" goes through a multitude of key changes to keep it interesting throughout its length. However, the melody is short enough that this attempt feels forced and the track languishes on regardless. This emphasises the problem of arranging music originally created for a very technically restrictive handheld, the Game Gear.

Most other additions to the album disappoint compared to their predecessor in some way. "Camp" is a rather pleasing interlude with its frolicsome pizzicato strings, but it pales compares to Shining Force II's "Welcome to Our Town" and is simply too repetitive to sustain its playtime. "Bar 'Sword of Haja'" features a jazzy beat to differentiate it from the preceding, though the piece is melodically awkward and atrociously short. "Huge Fortress" and "Holy Battle" possess interesting classically-inspired opening, yet the arrangements take too long to develop — the former remaining somewhat tedious until its relatively enjoyable conclusion, the latter featuring both riveting and off-putting moments. "Princess of Fate" has a peaceful opening on the harp, though it quickly develops an exciting melody. However, the chromatic notes placed in the melody — while interesting technically — feel awkward emotionally.

Coming to the climax of the experience, "Roar of the Demon" is a relative highlight. It spends a couple of tedious minutes developing uninterestingly, though halfway through the track breaks out into orchestration that at times feels inspired by Mozart, though at others far more modern. Arrangements like these reaffirm that Takenouchi was one of the most extensively trained orchestrators in the game industry. The album concludes with its lengthiest track, "Revenge of the Darkness." This somber piece, with its march-like rhythms, has a more mature tone than any other track featured, helping it stand out amidst the bunch. The piece also incorporates the game's main theme rather well, helping to cement it as the closing track of the album and round off the Shining symphonic experience.

This album, by and large, appears to be an imitation of Koichi Sugiyama's works, both melodically and orchestrationally. However, unlike Shining Force II, it fails to capture any of the senior composer's charm. Its biggest flaws seems to be overly simplistic melodies and awkwardly placed chromaticisms. Furthermore, the reliance on synthesizers rather than orchestra further testifies this album is inferior to other suites out there. What's left is a curious work that shows brilliance in places, but ultimately cannot capture the heart of the listener. While the album is an improvement on the original music, the source material was so restrictive in places that it hurt the album from the start.

Album was composed by Мотоаки Такэноти and was released on September 07, 1994. Soundtrack consists of tracks with duration over about 60 minutes. Album was released by Toshiba EMI.