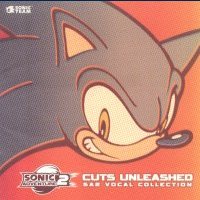 The Sonic Adventure 2 Vocal Collection doesn't look like it has too much to offer at first. It features eight vocal tracks and their instrumental versions at the end of the collection. Sonic Adventure 2's soundtrack is widely considered one of Jun Senoue's greatest Sonic albums and I couldn't agree more. The problem with its limited album is that, if you are interested in this for the vocals, you won't find a complete collection. If you are interested in this for Crush 40 music, then you simply won't get it all. There are still some adored classics that might just pull this album together, but if this album doesn't contain all the vocals, then what exactly is its appeal?

Some fans would simply answer the question of appeal by stating that this album contains "Live and Learn", because what else do you need? It's the classic Sonic vocal track and it's got rock and soul to spare, but personally I find "Escape from the City" to be the real highlight track on this album. It gives a great taste of Sonic vocals and has that fast paced pop/rock feel that one can expect from a 3D Sonic game. As with the other tunes, it contains silly yet entertaining autobiographical lyrics. Fortunately they are low key enough to make the song likeable to the average listener. From its catchy bass intro to the singable original melodies, this is one to hear for anyone that likes the idea of fast lighthearted rock. And yes, it is lighthearted, and there is barely any artistic depth or even artistic craft here. It's a Sonic game though and the bottom line is that it is great for what it strives to be.

The rest of the tracks are extremely less known as they are character themes that barely play while you are playing the game. In fact, for some of these, I've only heard the background instrumentals during gameplay. Every theme perfectly coordinates with its respected character. I don't think Sonic fans put the characters in the top reasons for liking the series. Most famous Sonic songs that work the best are level themes. Nevertheless, if you are a fan of the popular tracks that I have already mentioned then you will most likely adore Sonic's theme "It Doesn't Matter". It's yet another fast-paced rock song, but doesn't tire the genre. It's fresh and has amazingly catchy and singable melodies. Any song that had to do with Sonic or Sonic levels specifically in these 3D games were usually the best. This is because the game is a fast-paced one at heart and these tunes just fit naturally no matter how corny they are. One thing people didn't like about the 3D Sonic games were the multiple characters which, in turn, meant multiple gameplay modes that were simply not fast paced or natural feeling. These levels may or may not have been enjoyable to people (I have some good memories of them), but most will agree it's all about Sonic levels in the end.

The biggest dud on the album is "Fly into Freedom" simply because the style is not fitting in the least to the style of the game. It may have been fitting to the character, Rouge, but I just don't think many Sonic fans will enjoy this laid back style. If someone wanted music like this, there are a lot better albums out there for that. It's not natural and I think that is the bottom line here. Some may consider the rap track "Unknown from M.E." to be a bit of a dud too. I've met people that think Knuckle's rap is horrible, and I've met people that simply love it because it's apparently awesome or hilarious. I don't think either crowd would particularly enjoy this track, though. The rap is very ingrained into the song and becomes more of a background instrumental and this makes it kind of a background piece rather than a theme song. I also don't care for Shadow's theme "Throw it All Away". Shadow was kind of 'neat' back in the day, but this song embodies at lot of the reasons I hate what they have done with the character. It has this kind of "emo / badass" style that ended up putting Shadow in his own horrible gun wielding game. It's still appropriate to Sonic Adventure 2 and isn't overdone.

"Believe in Myself" and "E.G.G.M.A.N" are the final two tracks that I haven't mentioned. They are both pretty decent but nothing amazing. They are, again, extremely character fitting. "Believe in Myself" is Tails' theme, and is honestly a little weak and also a little wordy. It's still catchy and has a fun chorus. "E.G.G.M.A.N" is also a decent electric rock tune, but I've heard better. The chorus is a bit stale in this one. Again, it shows how fast paced rock music is the most fitting and everything else just feels out of place or forced.

Cuts Unleashed doesn't have all of the classic Crush 40 music from levels like Metal Harbor/Green Forest, and many vocals are missing along with that great Knuckles rap. The Sonic Adventure 2 Vocal Collection is a simplified character-inspired taste of the full soundtrack and it may be more fitting to those who like more mainstream music. But honestly, there is no real appeal here besides that it is from a great soundtrack. I believe, no matter who you are, you're getting the better deal to just go get the full soundtrack. This album is great, but it's just not AS great as the full thing. Although many Sonic games are received very negatively lately, a lot of the music is still received very positively and that is because of the influence of the Sonic Adventure series and these specific songs.

Album was composed by Фумиэ Куматани / Дзюн Сэноэ / Кэнъити Токой and was released on August 22, 2001. Soundtrack consists of tracks with duration over more than hour. Album was released by Marvelous Entertainment.