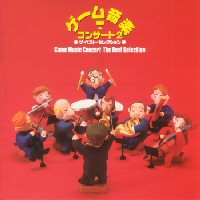 Here we have some more great game music given the orchestral treatment! This is the follow up to the wonderful Game Music Concert ~The Best Selection~. Unlike its predecessor, however, this one has more tracks from games that never made it to America than games that did make it. However, this is not to say that Game Music Concert 2 ~The Best Selection isn't any good. It's every bit as magnificent as the first one, and then some.

The first two tracks on this concert are taken from Mother 2 — Gigya's Counterattack. That game was released in America as EarthBound, for those of you who don't know, and it featured some really strange (though lovely at times) music. Fortunately, the two tracks that were chosen to make it to the concert are some of the more outstanding in the game. "Because I Love You," in particular, is a very lovely piece of music, and a very faithful translation of the game's song. The same thing is true for the following track, "EagleLand" (actually, this track is the Onett music), only it's a little livelier and more of a joyful romp than the previous song. (Out of the games listed on this album, this is the only game I've played.)

Following EarthBound is SimCity. I've never played the game before, but I really liked the two tracks here. The first one, in particular, has a very amazing, if somewhat overblown, finale, with a wonderful climax, and a grand finishing note. Interestingly this was arranged by composer Soyo Oka herself. The tracks that follow are the ones that never made it to America — "Great Strategy Expert: Soldiers Walk" and "Sound Novel Otogirisou" — these tracks are also great fun.

Also, there are two Japan-only titles that have gained popularity (somewhat) with American gamers — Dragon Quest V and Final Fantasy V. The arranged tracks for Final Fantasy V are very nicely done, and come close to the Final Fantasy IV tracks on Game Music Concert ~The Best Selection~. I had never heard Dragon Quest V's music, so the two arranged tracks were a pleasant surprise. "Palace Trumpet" sounds almost like it could come from a Mozart symphony (with a solo trumpet), while the "Bridal Waltz" is a stirring, and somewhat humorous, take on a Tchaikovsky waltz. Koichi Sugiyama really does have a knack for classical music!

Speaking of which, he was also responsible for another title that made it to North America, E.V.O.: Tale Of 46 Billion Years. The first of these two orchestrated tracks is spectacular — a romantic, stirring, classical-style piano concerto with a terrific solo. I don't know what classical composer this song reminds me of, but whoever it is, it is really, really good. A piano solo is used extremely well for another classical-sounding track, Wizardry V's "Opening."

Once again, the performance by the Tokyo City Philharmonic Orchestra is excellent, and the recording quality is great. That, along with a great selection of music that is more than candy to the ear, makes Game Music Concert 2 ~The Best Selection a highly recommended purchase, and a wonderful sequel to the original.