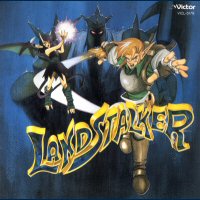 Just as Gungriffon effectively summed up years of experience and stylistic development for an older Motoaki Takenouchi, Landstalker acted as the debut as a budding JRPG music composer. Presumably sought out for his affiliation with the equally-talented Hayato Matsuo, and known for arranging under the venerable Koichi Sugiyama, Motoaki Takenouchi found a job at Climax Entertainment, where Landstalker was born. The soundtrack that came out of said project is just as important as that for Gungriffon, in that it represents Takenouchi's archetypal orchestral style more vividly than in later years, while still retaining aspects of the compositional lexicon that would grow in prominence later in his career. Furthermore, it marks the debut of another luminary of Japanese game music: Kenichi Koyano, arranging a soundtrack for the first time. With the combination of these two debut musicians, Landstalker -The Emperor's Treasure- displays a remarkable amount of musical creativity, technical accommodation, and historical significance.

Landstalker itself happened to be the first game designed as an original product by Climax — the company had previously developed games for the Takahashi brothers of Shining Force fame, and only now was the developer ready to strike out with a grand debut, which so happened to include Takenouchi along for the ride. As if to emphasize the newfound feelings of adventure and novelty felt at the company and in the game the company made, Koyano arranged the full opening to Landstalker in extravagant musical form. Compared to the original compositions — such as "Labyrinth" and "The Adventure Begins" — the otherwise straightforward arrangement is notably improved with brand new instrumentation and heightened sample quality, and the flow of the medley from one piece to another is well-paced and proportionate.

Many of these themes have much in common with the most prominent theme featured throughout Landstalker — that of "Treasure Hunter Lyle", elven treasure hunter extraordinaire. The original Mega Drive-accommodated rendition of the theme certainly holds up in terms of sample quality, and by the memorability of its melodic and harmonic qualities, both heroic and adventurous in nature. It only makes sense that Koyano's arranged version would follow the medley and deliver the main theme in a new form. The arranger's perspective on Lyle is more developed, evoking the shonen archetype and feel of contemporary Japanese anime and manga, with brazen wind synth and guitar sections among a vibrant rock beat. Lyle's optimism and youthfulness is, as a result, conveyed expertly as the album transitions from Koyano's own arrangements to the original demo tracks comprising the in-game soundtrack.

Upon encountering the demo tracks, featured in the rest of the album, Takenouchi had originally prepared for the Mega Drive release — the same atmosphere of adventure is retained, even in downgraded sample quality overall. "Labyrinth" provides elements of caprice, curiosity, foreboding, and chaos both at the start and by the end of Lyle's journey. More notable is how the track presents the ominous atmosphere of a risky, life-threatening dungeon heist — passages resembling King Crimson and other progressive rock influences can be heard throughout, as the track whirlwinds through entry and escape. Just as well-developed and fitting are the feelings evoked in "Beneath the Mysterious Tree": a meandering flute cascade and tribal percussion work on a similar level to "Labyrinth", albeit with more curiosity and less frenzy — most befitting of a conspicuously large tree than of a dangerous preoccupation with spelunking!

Adventure, in every extreme of its grandeur and its peril, is not to be found in Mercator Harbor Town, where such tunes as "Streets of Flowers" and "The Mansion of Mercator" express a gaiety and lightness present in the flourishing settlement. The former track has its ties with earlier town music from games such as the Shining Force and Dragon Quest titles, yet works to the advantage of Takenouchi's superior skills with arranging for the Mega Drive's Yamaha FM chip; the latter works to a similar degree, though more relaxed and worthy of an aristocratic scene than of a castle town. Both tracks, alongside others for areas such as the local church and celebrations, bely more insidious forces at work in the game's plot, yet provide both context and a further extension of the adventurous themes that connect every aspect of Landstalker.

Themes like "Seeking Treasure" and "Black Market" also resemble JRPG musical archetypes. However, they are well composed and arranged by a masterful Takenouchi — his background arranging under his mentor Sugiyama is notable at this early point in his discography. These themes work to describe a whole number of images, while incorporating numerous influences from Middle-Eastern music, progressive rock, and then-contemporary efforts of other JRPG music producers. However, the soundtrack features many reminders to the listener that Lyle's adventure isn't some kitsch affair like any other from the time: "Friday and a Soft Breeze" may be fluttering in the wind on top of flute and pizzicato strings but it still stands alongside the pulsating "Wicked God's Banquet", where tribal percussion and horns efficaciously define the presence of growing evil in a seemingly-peaceful forest village. Nor are the dungeon interludes happy-go-lucky, with the heavy percussion and shrill tones of "Premonition of Trouble" are equally at home with the bumbling swing rhythms and mockingly-sanguine synths describing the Doronjo-esque gang of three in "Hey, It's Your Turn!".

As the game progresses, so does the plot — a plot that grows increasingly complex and, necessarily, complements such growing complexity with more climactic music. "The Ballad of Princess Loria" balances a romantic sub-plot against the hidden grandiosity and beauty of King Nole's ruins and treasure, revealed by tone in "Mysterious Island", another underlying theme that brings development to an otherwise run-of-the-mill adventure. Mysterious backing tracks like "The Death God's Invitation" and "Torchlight" both add tension and ambiance to two meagerly-lit and gloomy dungeons, expanding both the variety of music to explore in Landstalker and what Takenouchi was able to achieve on the Yamaha sound system. All of these tracks not only work on a thematic level, but succeed in pushing the limits of memory restrictions on the game cartridge to develop most of the soundtrack past the 1 minute mark, and even well beyond that benchmark!

A wide variety of event BGM can be heard in this game, a game full of variety in events, scenarios, and contexts — as though Lyle stalks both the land and the full diversity of locales and people. Nevertheless, themes such as "Friday's Memory" and "Think I'll Disrupt This Good Cheer" are as superficial as the events they pertain to in-game, with meager development and relevance to the rest of the soundtrack — indeed, they hold the soundtrack back somewhat. This adventure must come to an end, and each end of a scenario is well-punctuated. "Adventure Spirit" provides a swashbuckling boss battle theme for climactic encounters, and "The Divine Guardian of the Maze" concludes Lyle's fight for the treasure of King Nole in trumpeting, percussive, technically-impressive form. And at the end, in a gesture to himself, to Climax, and to Lyle, "To the Great Adventurers" Motoaki proclaims, marking new beginnings and a beloved farewell to an adventure now over.

What may seem to many as a typical JRPG soundtrack is, in fact, the beginning of a prolific, though short, career in JRPG game music that Takenouchi sustained up through Gungriffon, and suddenly ended. Landstalker is, in effect, the definitive sampler of the young composer's creative ability, and the earliest significant mention of another early-90s musician as well. Overall, the album submits Motoaki Takenouchi to the record books as an impeccably well-rounded member of the game music community, and it was around this period in time that Motoaki became involved with other composers through the Troubadour label as well. Equally notable is the technical quality that Takenouchi was able to achieve on the Mega Drive, allowing him to replicate the musical palette available to composers and arrangers on the Super Nintendo to a respectable degree, and also taking advantage of what the Yamaha sound chip had over the Sony chip used in the SNES. And, ultimately, the Landstalker album just happens to be an excellent release for one of the most notable Mega Drive JRPGs released at the time, and one that stands the test of time to this day.

Album was composed by Мотоаки Такэноти and was released on December 16, 1992. Soundtrack consists of tracks with duration over about 50 minutes. Album was released by Victor Musical Industries.