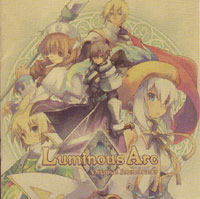 Luminous Arc is a strategy RPG developed by Marvelous Entertainment. Released on February 8, 2007 in Japan, the music behind the game was partly composed by Procyon Studio. Consisting of its main composer, Yasunori Mitsuda, a second composer, Shota Kageyama, who just recently resigned from Procyon Studio, Kazumi Mitome, responsible for the sound effects in games such as Xenogears and Parasite Eve, and Akari Kaida, responsible for tracks in Bio Hazard and Breath of Fire III, the soundtrack would have a mixture of talents. How well does this mixture of talents blend in the end? Is it more like oil and water, or do we get something smooth and refreshing like a milkshake? Read on to find out.

Since this soundtrack contains more than a typical amount of composers, this review will be broken down by composer. Yasunori Mitsuda contributes only one track to this album. His piano-based "Prelude," while short, is still a very nice piece of music. While there isn't much to the track in terms of development, it still manages to sound fresh and heartfelt. Unfortunately, portions of this melody also sound extremely similar to "Dreams of Eternity, Memory of Skies -Zwei!! 2 People's Great Adventure," heard in the Zwei!! Original Soundtrack.

Shota Kageyama is probably the strongest composer on this album. His main theme composition, "Theme of Luminous Arc," is an extremely memorable piece, full of lush orchestration. It also sounds quite motivating and adventurous in tone, which helps to draw the listener into the music. It's probably my favorite track on the entire album. Of course, this isn't the last you hear of this theme. It can also be heard in "The Whistle of Victory," which utilizes some unique instrumentation as well. The melody is mainly played on woodwind, with xylophonic accompaniment. Overall, it's not as good as the original, but it still manages to stay in tune with some of the pieces on this soundtrack.

As for his other contributions, Shota Kageyama must have been given the secrets of Mitsuda's music box sound, because "Teardrops" is a very nice piece similar in style to some of Mitsuda's previous works. Unfortunately, using only a single instrument isn't always the best way to develop a track, but it still gives out a lot of emotion. His battle theme, "A Desperate Battle Without End," is probably the best battle track on the album, and appears to serve as the final battle track. The militaristic sound and lush orchestration make it feel at home in a soundtrack for a strategy RPG. There is also a short woodwind section that helps to break the tension and to stave off the repetition for a bit. Overall, most of Kageyama's contributions on this album are enjoyable.

Kazumi Mitome is the first composer where the lackluster appeal of this album really starts to take hold. Mitome seems to take a rather dramatic effect to her compositions. "Attack" is a rather generic battle theme, and while it certainly fits the style of a strategy RPG, nothing much really goes on to keep interest. It's rather bombastic, but doesn't really go anywhere. "Uphill Battle" is another battle track that is extremely dull; while the instrumentation is more inviting than in "Attack," the overall execution is poorly done. Repetitive strings and brass are all that stand out in my mind for this track.

Mitome also contributed the vocal theme "Brilliant World" sung by Kaori Oda. The upbeat composition has some nice instrumentation and youthful vocals, but overall seems like a rather generic J-pop track. A 'Brazilian Club Mix' is featured at the end of the soundtrack arranged by Shota Kageyama; it's far better thanks to the energetic beats and enticing guitar work. Vocal theme aside, overall the drama experienced by Kazumi Mitome's contributions is rather unwelcoming and tries extremely hard to emulate something that Sakimoto may have composed for a strategy RPG.

Akari Kaida contributes over half of the pieces on this album. As such, the success of the album really rests in her hands. Her compositions are a mixture of styles and most of them suffer from the same bland direction that Mitome has taken. Her "Iridescent Journey" is a nice, mellow composition that complements the "Theme of Luminous Arc" that precedes it. "Believe in Yourself," which houses the main theme, is also among the best that Kaida has to offer and adds considerable drama to the conclusion of the album with its rasping brass crisis motifs.

Other than that, I'm hard pressed to find a piece I enjoy. While her pieces range from happy to serious, her style stays the same. Usually, the melody is heard, but with very little development to support it. As such, many of her tracks are overly repetitive. A good examples of this is "A Risky Situation," a track that tries to be serious, but ends up becoming grating as it falls into an almost crisis-like composition. Similarly, "Go On a Shopping Spree!" is a very light hearted track that soon suffers from lack of melodic inspiration despite its initial pizzicato string and percussion quirks; unfortunately, the primary melody is all you hear and it just repeats with no development.

Kageyama's "Epilogue" can be considered the glue of the soundtrack. In it, three pieces can be heard. "Brilliant World" by Mitome, "Prelude" by Mitsuda, and Kageyama's own "Theme of Luminous Arc" all make their way into this piece. The nice thing about this piece is that the lush instrumentation helps to bring both "Brilliant World" and "Prelude" into a more developed manner and also helps to strengthen the main theme.

Overall, this album is lacklustre. This team with various levels of experience and talent do not mix well together in creating a worthy soundtrack. Mitome and Kaida, the main forces on the album, only contribute to its demise. On the other end of the spectrum, Kageyama's and Mitsuda's contributions help to keep the ship from sinking entirely. Its greatest asset is its remarkable sound quality for the DS, courtesy of Procyon Studio's Hidenori Suzuki, Junya Kuroda, and Shota Kageyama.