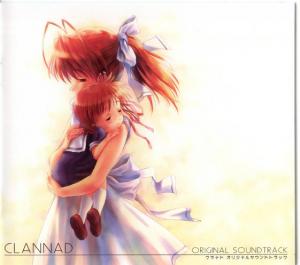 Visual novel company Key's third major title, Clannad, was both a commercial and critical success. Released to an awaiting audience in 2004, this was their first release to proudly sport an all-ages label and also inspired an anime adaptation. The work also featured Key's largest soundtrack till Rewrite, with three major composers writing for two discs of music, plus a third mostly bonus disc. The music featured here was originally written for the game, but most pieces made their way to the anime too. How does the soundtrack stack up on its own merits?

Magome Togoshi opens the soundtrack with "Ushio," a gentle piano solo. What it lacks in complexity or length it makes up for in raw emotion, serving as a fitting introduction. Appropriate for a bishoujo game, "Her Determination" has a bit of a spunky atmosphere to it thanks to the breathy synth and electric guitar. Some enjoyable key changes are present as well, making for a listen that always keeps one's attention rapt. "Country Lane" is quite laidback, using an amusing guitar motif repeated to introduce the piece, which then segues nicely into the melody proper. It's enjoyable, but its unassuming nature and relative lack of development makes it a bit tedious to listen to.

"Illusions," Togoshi's oddest theme on the album, utilizes rather curious synth and the sound of crickets to create an austere soundscape. While it isn't inherently interesting, the elements work, and the melody, though slow and drawn out, begins to take focus. Togoshi returns to more traditional musical styles for "Étude pour les petites supercordes," a silly piece utilizing strings, a triangle, recorder and accordion in a classical vein. The choice of instrumentation makes an otherwise mature composition sound childish, though not in a negative way. The piece is amusing and charming. "Hurry, Starfish" is similarly silly at its outset, and rather uninteresting overall, until the melody becomes richer about a minute in, at which point Togoshi plays with key and instrumental changes, creating a piece that, just like the preceding, is balanced perfectly well between childishness and complexity.

"Existence" starts a trend of sadder, more emotional pieces by the composer. The soothing guitar placates the somewhat sharp synth, forming a balanced, gentle piece. The synth-heavy "TOE" is hopeful, yet tinges of sadness can be heard. This piece is one of the few to not loop, and features a fine ending on piano. "Shining in the Sky" is another hopeful yet sad composition, this one more orchestral in nature. The piece develops quite nicely during its extended playtime. Togoshi composed "Summertime" in a similar style, yet the sadness in this piece is far more explicit. The dongs of the bell seem to herald an unfortunate event, and are perfectly times with the sadder change in tone. Togoshi also composed an ending theme, "-Two Shadows-." The piece is rather happy, though not peppy, featuring a lush, rich sound, helped by singer riya's vocals. A bagpipe is introduced for a short enjoyable instrumental interlude, oddly reminiscent of Gust's works.

Similar to Togoshi, most of Shinji Orito's works on the first disc are of a lighthearted variety. "Like the Wind" is fun and peppy, with an enjoyable beat, and surprisingly complex melody. The xylophone in "A Couple of Idiots" quickly establishes the piece's silly tone, which might get grating quickly considering the piece's short length and jumpiness. "Return to Ashes" is faux serious, establishing itself as a rollicking ride with slightly over the top instrumentation and melody. It unfortunately lacks a bit of depth and particular oomph, one which is found moreso in the similarly styled "Dumb," thanks to its early MIDI style drums and what I can only describe as pinpricks of noise, that seem randomly placed, but just sensibly enough to detect the hand of a skilled composer behind them. Overall though, the piece fails to develop satisfyingly well, staying within its promising though innately uninteresting element. The saxophone in "Phases of the Moon" gives some much needed oomph as well, though once again, the piece doesn't develop more than would be expected, resulting in a disappointing listen.

"Spring Wind" starts off with silly instrumentation and melody, yet soon its true colors show as the melody develops into a nostalgic piece that never quite loses its lighthearted edge. The two elements are balanced very well and the transition is seamless. "Town, Flow of Time, People" is synth heavy piece not unlike Togoshi's "Illusion" in tone, though with more of a definable melody. Another highlight, "Empty Space" isn't over the top, and features an enjoyable drum-like piano motif. The piece paints a rather violent picture with its heavy use of drums and synth, and develops reasonably well. "Snowfield" is almost chokingly thick with emotion, which could be seen as either a detrimental factor or boon. Certainly, the piece isn't lacking melodically and develops well. Two versions of "Roaring Tides" are present, the second being a far slower variation of the former. The piece too is almost overwhelmingly sad, though the second version is somewhat tediously slow. "White Clovers" is predominately hopeful and nostalgic. The melody picks up in complexity at a perfect moment, introducing a light drum beat on the side.

Jun Maeda has a relatively slight role on the soundtrack, but his contributions are among the best. "Nagisa" is an unparalleled character theme, with a memorable melody that picks up wonderfully, highlighting both hope and sadness. The piece receives two variations at the end of the second disc. the spellbinding "Nagisa ~ Farewell at the Foot of the Hill" and, to close the second disc, "Tiny Palm"; it begins by recalling "Nagisa" but segues into a new melody with the arrival of riya's vocals, referring back to the original theme at set intervals in the melody. "The Place Where Wishes Come True" also receives two variations, both on the second disc. The first version of this nostalgic theme is a simple music box piece, but the second segues into a lovely section for its second half, using strings to create a very heavy and pleasing atmosphere. "Distant Years" receives a more simply named piano version to complement its string version featured later on the disc. The melody is thick but austere, in a sense, and is rather pleasingly overwhelming. Meanwhile, the maracas help visualize the subject of "Country Train," a piece that is both hopeful and nostalgic, though perhaps a bit too forcefully so in parts.

There are two more vocal themes present. "Mag Mell," composed by eufonius, is a rather peppy piece, perhaps a bit overwhelmingly so, though not enough that it can't be enjoyed with a bit of head bobbing. "Ana," composed by traditional, is hard to take seriously due to its odd English lyrics, though the melody is strong if not a bit melodramatically thick. The third disc is composed almost entirely of slight variations of earlier pieces on the soundtrack. While it's nice to have them all compiled into one place, away from the soundtrack proper to avoid the annoyances of over-repetition, having them all in one spot means repetition ad nauseum. Shorter and karaoke versions of the vocal themes are also present, including an almost obsessively long version of "Ana." There are also two unused tracks shoved at the tail end of the disc, though neither of these is remarkably notable.

The Clannad Original Soundtrack is one of the best examples of Key's sound, second only to Air. It should be rather approachable for those unfamiliar with the game or anime prior, though fans of the title will certainly find it far more appeasing. There is a large variation in tracks present, though the lighter themes might be aggravating to some, and the sadder themes might be too hokey or overbearing to others. That said, it does make for an enjoyable listen, and anyone in the mood for a very good visual novel type soundtrack should certainly give it a listen.