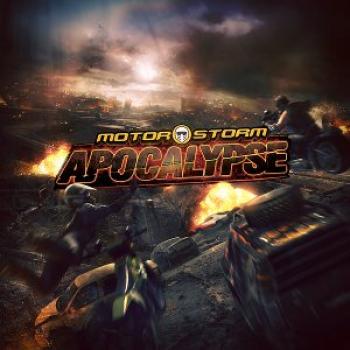 Over the course of three games (and one port), the MotorStorm series of racing games had become something of a flagship franchise for the PlayStation 3. This was particularly on the strength of the first MotorStorm, which has sold more than 3.5 million since its release in the early days of Sony's eighth-generation console. Subsequent titles were no slouches either in the sales department and, to up the ante for the franchise's next instalment, MotorStorm Apocalypse, developer Evolution Studios decided to set the game's already explosive racing action in a collapsing San Francisco. This indeed apocalyptic scenario was given a horrifying real-life face in March 2011, when the disastrous Tohoku earthquake and subsequent tsunami devastated parts of Japan and caused a meltdown in one of the country's nuclear power plants. Understandably so, MotorStorm Apocalypse release in the UK and USA was delayed and the game still hasn't seen the light of day in Japan.

Music-wise, MotorStorm Apocalypse marked a shift from previous MotorStorm titles which had relied on licensed metal tracks for their soundtracks. This time. however, Evolution Studios took an intriguing hybrid approach. Prominent film score composer Klaus Badelt (Gladiator, Pirates of the Caribbean: The Curse of the Black Pearl, Poseidon), a long-time collaborator of Hans Zimmer and his group of Remote Control composers, would record about 10 minutes of orchestral music at Abbey Road Studios. The individual musical parts and stems were then given to DJ acts Noisia, Elite Force and DJ Shadow for them to twist and turn the compositions into drum & bass and dubstep tracks. Each remixer was given great freedom to change the orchestral material at their leisure, but no direct collaboration took place between Badelt and the three remix artists. Almost all of the music composed for the game found its way onto MotorStorm Apocalypse's extensive, 86-minute digital album release in the US Playstation Store.

Soundtrack fans that first got interested in MotorStorm Apocalypse due to Badelt's involvement in what is his first game score need to adjust their expectations accordingly when approaching this album. The mix of orchestral and electronic elements that characterised Badelt's most popular film scores is evident on MotorStorm Apocalypse, but only during the album's first four tracks. The vast remainder of the soundtrack is stylistically far removed from the 2000's blockbuster sound that attracted many listeners to Badelt's scores. In other words, his contributions shouldn't be the main reason for you to pick up this score. But that doesn't mean that Badelt's few pieces are negligible.

One the contrary, Badelt writes a number of hyper-charged, ballsy action tracks that will quickly make listeners regret that there's so few of this music on MotorStorm Apocalypse. It's no surprise that Badelt relies on a blend of brass-heavy orchestral sounds, electronic beats and guitar riffs to unleash a full-force assault on the listener's senses — these ingredients have been stalemates of the Remote Control sound for a while now. What is astounding is the nature of the rhythmic impetus that powers most of these tracks. According to Badelt, the game's producers asked him to infuse his compositions with "a really fun, funky, bluesy edge" to reflect the game's San Francisco setting. Interestingly enough though, the first connection score fans are likely to draw is with David Arnold's James Bond scores and their update of the 'classic' Bond sound of yesteryear. The reason for this unexpected parallel is the decidedly 60s-like swagger that the brass section provides in its riffs and melodic stabs amidst the more contemporary sounds of grinding guitar riffs and pounding electronic beats. The violins occasionally follow a similar path and particularly on "The Pro" add an unexpected, but all the more welcome lustre to the music through their luxurious melodies.

Badelt's earlier Remote Control scores are more clearly referenced on the more simply-structured, string ostinato-driven "The Veteran", which mostly does away with the earlier cues' retro stylings. It remains a serviceable rousing listen though due to its sufficiently varied and powerful percussive background. And while all instrumental groups undergo a good deal of electronic manipulation, this fortunately doesn't result in the synthetic, lifeless sound of many Remote Control scores, but instead gives the music a compressed, gritty feeling. All things told, Badelt's compositions are a lot more stylish than one would have expected to hear on the soundtrack of a futuristic racing game, but just as pulse-pounding as one would have hoped for.

That level of excitement isn't quite maintained by the following one-and-a-quarter hour of remixes, but they certainly aren't lacking for energy. Noisia, Elite Force and DJ Shadow all deliver polished remixes that contain a bevy of diverse beats which both push the music forward and prevent it from becoming monotonous (most of the time at least). And while each of the remixers imbues their music with a personality of its own, the different artists' pieces flow reasonably well into each other and never leave the impression that too many cooks have spoilt the broth. As for how well the remixers' tracks incorporate Badelt's orchestral material, score fans will again have to adapt their expectations, this time to the rules of the dance-friendly genres that MotorStorm Apocalypse dabbles in. The remixes include more or less brief excerpts of the album's opening tracks, but develop them by contrasting the orchestral samples with various electronic beats and soundscapes — not by actually changing the material itself. Given that 10 minutes of orchestral score are spun into 75 minutes of dance music, it also shouldn't come as a surprise that the remixes often rely on their own rhythmic and melodic constructs.

That's not to say that the remixers don't put the original material given to them to good use. Particularly Elite Force, who contributes the majority of remixes, displays a shrewd sense of how to incorporate string, brass and electric guitar sounds organically into his pulse-pounding electronic tracks. True, most of the time the orchestral samples are mixed into the background. But even then, on cues like "Speedball" and "Paradise Alley", these snippets actually provide the tracks' melodies. And they do so quite effectively, adding a sense of drama and urgency that befits a game that is set in a crumbling metropolis — something that the beats and twitching electronic sounds themselves don't quite evoke. That's not to imply that the beats on Elite Force's track aren't up to scratch. His compositions are the album's most taut, focused tracks, rarely letting up in their intensity with hardly a breakdown in sight.

At the same time, Elite Force knows when to take the foot off the accelerator. With "Headlong" and "Jackhammer", he serves up two dark, nightmarish remixes full of dissonances and twisted sounds. On "The Horror", the slower rhythms achieve a different effect when coupled with the opening tracks' guitar material for an effortless, still weirdly contorted sense of cool. Given that "The Veteran" was Badelt's most rhythm-centred composition, it's no surprise that its material is most frequently adapted by the remixers. The piece also provides building blocks for some of the album's standout moments when its racing-fast string ostinati are married with Elite Force's authoritative beats on "Loco" and "Breakneck", both elements perfectly complementing each other. Particularly "Breakneck" earns its title with a stirring furioso finish that sees string rhythms and beats pushing each other hard and harder towards the cue's climax.

The majority of the remaining remixes comes courtesy of Dutch Electronic music trio Noisia. Their tracks follow Badelt's cues in the album sequencing and open the electronic side of MotorStorm Apocalypse, although they do so in somewhat jarring fashion. Of course, there would always be a rupture in the album's flow due to the stylistic difference between Badelt's and the remixers' works. However, Noisia's first few tracks, with their comparatively minimalistic beats, borderline obnoxious lead effects and padded out running times don't exactly help matters. "Charger", "Deathmatch" and "Oversteer" will work better on the dancefloor than during a stand-alone listen, although their compressed, corpulent beats and greater number of breakdowns keeps these longer cues going reasonably well. Badelt's material is hardly referenced on these pieces, but things get more interesting from "Slipstream" onwards when Noisia's tracks become more psychedelic and are given more space to breath through spacey, atmospheric synth leads. The music also becomes more varied, effectively changing between expansive passages of floating textures and more beat-driven episodes.

This new found taste for psychadelia reaches its culmination on "Traction Control", where the colourful synths are complemented by syncopated, almost playful beats that add an unexpected touch of whimsy. These later Noisia cues also make greater use of the orchestral material, although in less organic fashion than Elite Force's pieces. "Blown" simply takes whole passages of "The Rookie" and intersperses them with sections for electronic material. The resulting combination works better in the piece's second half when the different textures are intertwined more closely, but the resulting fusion still feels half-baked. "The Assembly" fares better by quoting "MotorStorm Apocalypse"'s electric cello solo and underlays with it with mid-tempo dance beats, giving the instrument's intriguing tone colours a better opportunity to shine than on Badelt's compositions, where it was rarely used.

DJ Shadow only contributes two remixes, but on the strength of these tracks it's clear the album would have benefited had his involvement been more significant. His cues break up the album's full-on sonic onslaught with lighter, busier beats that have a warm vintage feel to them. "Apocalypse Here and Now" again references "The Veteran" and accompanies that composition's string ostinati with some fitting beats, although not quite to the same effect as "Breakneck". "MotorStorm Apocalypse (DJ Shadow Remix)" stands out for its inclusion of Badelt's swinging brass and strings and the translation of their sweep into its own beats — a rarity on MotorStorm Apocalypse's remixes, which usually rather integrate Badelt's material for its theatrical qualities.

As long as you keep in mind MotorStorm Apocalypse's genre — drum & bass instead of orchestra/electronica hybrids — you'll enjoy the result. The three remixers show various degrees of creativity when it comes to making the most of Badelt's tracks, but they mostly succeed in organically incorporating his string and brass riffs into their beat-driven tracks. Particularly Elite Force's cues achieve a healthy balance between atmospheric backing through orchestral samples and insistent beats that only occasionally take a detour into more relaxed avenues. Noisia's tracks are initially less accessible due to their grating lead effects and extensive running times, but open up later on and become more colourful, varied and inviting. And Badelt surprises with some orchestral hybrids whose combination of gritty contemporary action sounds and 60's inflected brass and violin melodies swings as much as it powers through the album's opening minutes. MotorStorm Apocalypse can't avoid feeling a bit repetitive towards the album's end, but that's not the remixers' fault, who provide a steady stream of fresh beats. It's just that 86 minutes is a bit long for any kind of soundtrack, particularly for one that's as relentless as this MotorStorm Apocalypse. Still, fans of electronic dance music will find much to like here.

Available only in the US Playstation Store. 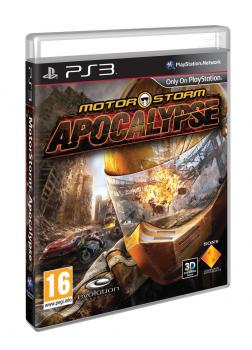 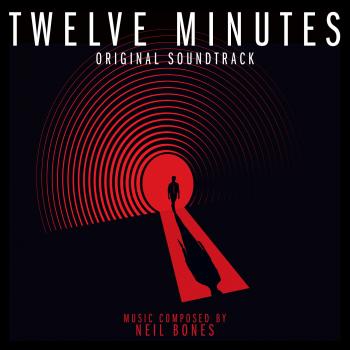 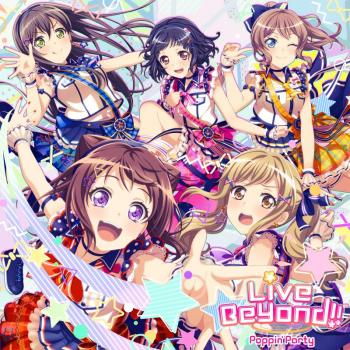