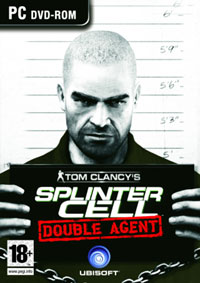 Double Standards of the Third Echelon.
A spy series of video games entitled Splinter Cell has never pretended to be an original project and was just a renewed clone of a natively console game Syphon Filter, which in its turn has borrowed a lot of things from Metal Gear Solid. It’s rather predictable that one couldn’t hold over for a long time being a secondary project and by the third novel Splinter Cell pined away and stopped developing, but at the same time the musical aspect flourished. Game maker Ubisoft hired Amon Tobin to soundtrack the Tom Clancy`s Splinter Cell 3: Chaos Theory and in his joy he deserted electronic music for live musicians. It was this very music line that another citizen of Canada Michael McCann aka Behavior continued to draw. He was charged to write a music score for the following after Chaos Theory chapter of the series called Double Agent. Here the long-expected balance finally was achieved, when both the game was quite good and the music was a success with Tobin’s and McCann’s work can be safely considered unique in the game industry.

After the notable theme of James Bond guitar became a very popular element of spy chronicles. It was used almost in every composition of Chaos Theory and didn’t pass over Double Agent. But if Tobin’s guitar only helped crushing drums to fire the passions in “The Lighthouse”, which is formally the headline theme of Chaos Theory, then in Double Agent theme it appeared to be a leading instrument and a moderate pace of the composition, and the track’s minimalistic sound design, consisting mostly of noise and deadened drums, allow to enjoy its every chord. A lot of different noise which intentionally make the music of Double Agent so dirty is a vital demand of the composer from the sound department of Ubisoft. Their desire to give up digital sound in favor of a warmer analogue one even more distinguishes the soundtrack of this game from lots and lots of others.

Besides the analogue sound the second significant element of Michael’s music is his general using of electro-acoustic guitar and the absence of any unwanted instruments in the entirely acoustic music score. If Amon’s music was actually overloaded with plenty of instruments and sound effects, in Michael’s soundtrack every note, every knock and creak are well-defined and this makes his music far more simple and intelligible and at the same time more cinematographic and dramatic so that it matches the game perfectly.

The action of Double Agent is set in the various parts of the world that’s why Michael tried to avoid a cliché when the style tunes to the music culture of the countries where the secret agent is. Michael considers that the music accompaniment should follow the plot and help to reveal characters’ natures, consequently it’s no wonder that the listener won’t find any ethnic instruments in Shanghai theme. But for the only exception in African level (Kinshasa) where there’s a civil war according to the game story and the ethnic conflict had to be reflected in the music.

The soundtrack of Double Agent is one of a few music scores with which an interesting occasion happened, i.e. PC, Xbox 360 and PC3 versions of the game included extended versions of action-tracks of which the simplified adaptations of the game for PS2 were deprived. At the same time the inferior consoles could boast of availability of prolonged background themes for which the main variants lack. And while gamers diligently picked out and gathered together the missing tracks from here and there nearly two years passed away. During this time compositions legally placed in the official website of the composer were downloaded more than a million times (if the music had been released officially and such number of copies had been sold out then the disk would have become at least platinum!). It emphasized the unprecedented interest in the soundtrack (as well as in the rest of unreleased soundtracks of the game studio Ubisoft) and proved that the company had again missed the chance to earn some money and please the gamers. But what can we do if money rules the world and when a publisher of the game doesn’t see any possibility to make profit on the soundtrack release and it ignores all the fans’ requests and entreaties. The value of the OST is only raising by the way. Maybe some day Ubisoft will prepare an official release and we’ll condescendingly put in a few words about it, perhaps. But meanwhile get ready for the brief excursus of the 4-hour music world of Splinter Cell: Double Agent.

An ice Icelandic theme opening Sam Fischer’s new adventure distinguishes from the other ones by a dominating vocal of a Canadian folk-singer Andrea Revel. Here the guitar sounds like in a typical composition of Gustavo Santaolalla, who is one of Michael’s most favorite film composers. An action-sequence of Iceland presents to the listener a surf-rock guitar riffs, a fat bass and violin cinematographic motives with clanging metallic sounds as well as live acoustic drums used everywhere in the soundtrack (a brilliant drummer Scott Russel taking part in the recording is a friend of Michael). Action tracks in Double Agent are likely to be the longest-lasting tracks ever in the history of game music, i.e. the length is from 10 till 20 minutes. It’s rather hard to tell something new about every of these tracks cause they are composed on one and the same principle, however they’re fabulous to an equal extent and the only difference between them is the melodics of electro-guitar and rhythm of drums.

The atmosphere of Kansas prison is created via ambient female vocals, loud resounding drums, violin (its motives sometimes resemble of sad notes of Max Payne 2: The Fall of Max Payne) and various guitar effects including those which appear when string are plucked by inappropriate things. This theme is the closest one to the heading composition and its action component recalls for the music from the mission in Iceland. A cold wind of a sea of Okhotsk brings the sounds of a tender acoustic guitar and deserted, at times scarcely perceptible sound design, however the music scenery of Shanghai contrary to the idea of a “live” soundtrack is from top to bottom formed up on an electronic motive of a song “Angel” by a trip-hop group Massive Attack (a favorite band in Ubisoft). In fact trip-hop has very much affected the music style of Double Agent. For example, a track for a Mexican island Cozumel was inspired by Portishead.

One can clearly notice the influence of a great musician Brian Eno and a film composer John Murphy in New-York music theme which is one of the slowest and most beautiful tracks but is somehow stands apart from the others. Its slow and unhurried background mildly spreads out under cover of the night, the night which stillness is being broken only by three luminous eyes of the agent Sam Fischer’s night-watch glasses.

Sounds like Acoustic, Ambient, Electronica, Instrument, Instrumental, Region, Trip-Hop - that's what we can say about this album.