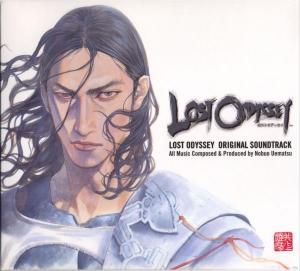 We find Lost Odyssey being led by the charge of a tried and true combination of Sakaguchi and Uematsu, our old friends of Final Fantasy fame. After their lackluster performance in the US via Blue Dragon, the pressure was on to create an entertainment experience more likely to capture the hearts and minds of the target US audience. Yes, that's right, lonely bachelors between the ages of 16 and 40. In his attempt to produce a more adult game, Uematsu crafts an exceptional soundtrack that harkens back to "the good old days" of world maps, pixelated heroes and heroines, and megalomaniacal big bad end guys.

This album tends to play it on the safe side, rarely taking many chances with its progressions and choices of instrumentation. It remains cinematic in a sense, and carries a rich atmosphere that paints the appropriate pictures outlined by the titles. A strong album, but the obvious restraint keeps it from becoming groundbreaking or extraordinarily memorable. An unfortunate development, but perhaps necessary, given the tenuous hold Japanese RPGs have in America.

The first track, aptly titled "Prologue" wallows in the main theme of the game, and does so in a somewhat predictable manner that is nonetheless enjoyable (even moderately inspiring). The militaristic feel continues unabated throughout the next several tracks, although "Fire Above the Battle" is particularly notable for its sweeping swells of brass and strings. I was reminded of Hamauzu on various occasions, which is always a good thing with this reviewer.

"An Immortal Life" quickly changes the pacing, taking on a melancholy mood that is also popular on this track. The respite is short, however, as "Battle Conditions" rips apart the relaxed ambiance with a fast-paced theme I can only assume is the normal battle track. It is much more like something you would expect to hear on one of the more classic Uematsu soundtracks, featuring steady 4/4 snares along with alternating guitar and synths. The victory fanfare is typical, with pulsing brass that gives way to a laid-back take on the game's main theme. Nothing out of place yet. No surprises, good or bad.

Things get (relatively) interesting during the environment and town/city themes, the choice of instruments and arrangement becoming much more unique in general. "Epsylon Range" is not an example of this, but it is no less enjoyable, reminding me very much of Narshe from Final Fantasy VI with its plodding rhythm and hazy strings. "The Witch's Mansion," however, is super creepy, which is something I never thought one could achieve with a honky-tonk piano (or what sounds just like one). The careful modulation of tempo and melody create a surprisingly tense and unique piece that is very enjoyable for its purpose.

I cannot go without mentioning the whacky zany altogether crazy nature of "Kelelon Forest," which is best described as a minimalist's Mysidia. A sine-like synth lead pokes about a goofy and cheerful melody, and is joined by comical percussion later in the piece. It is a welcome breath of fresh air from the doom-and-gloom war atmosphere and tragicness of the other tracks. "The Capital of Numara" is probably the best town theme on this album, having the most character of them all and a melody which evolves well with the harmonies which accompany it.

There are a couple of hokey and cliched pieces, such as "Gangara's Plot," which reeks of bad guy in an age-old method of harpsichord and deep strings. The vocal themes suffer from this as well, none of them succeeding at leaving a lasting impression upon the listening party, aside from the bitter aftertaste of excessive cheesiness. "Howl of the Departed" is something else, starting with very fake and lifeless choir that eventually evolves into a pretty solid battle theme. It does not last long, however, soon degrading into creepy Japanese mumbling and more uninteresting choral work. Not very impressive for a final battle theme.

This soundtrack is nothing special for Nobuo Uematsu. There is an assortment of strong and memorable tracks that one can easily listen to for an extended period of time, while a few almost feel like a sort of punishment. Of course, even bad Uematsu is pretty good. To judge this album requires one to specify the bar that should be set and surpassed. As far as video game music goes, this is above average, or even excellent. Unfortunately, for an Uematsu soundtrack, it is a little too typical and tame, following all the rules for its genres and failing to carve a unique place for its own music. The Lost Odyssey Original Soundtrack is a solid score that does its job — and pretty well, at that — but is nothing new. If you are hungry for something different, you may not find it here, but it is hard to not find something to enjoy.

Прочитать рецензию....
Показать
02.02.2009    1677
Album was composed by Нобуо Уэмацу and was released on January 23, 2008. Soundtrack consists of tracks with duration over more than 2 hours. Album was released by Aniplex.

Sounds like Ambient, Choir, Classical, Electronica, Pop, Vocal - that's what we can say about this album. 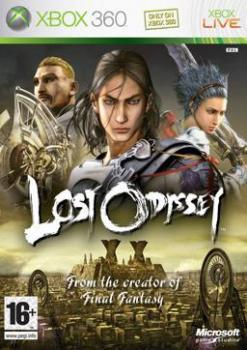