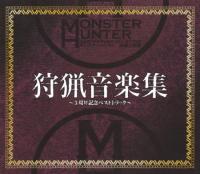 Led by Masato Kouda, the composers of the Monster Hunter series have always done a fantastic job conveying landscapes, towns, scenes, and battles with a mixture of orchestral and world music. However, between the filler, the roars, or the multiple volumes, Suleputer never quite got the presentation of the accompanying soundtrack releases quite right. Although a third anniversary is a strange thing to celebrate, the Monster Hunter Hunting Music Collection aims to remedy this by offering some of the best themes from the Monster Hunter, Monster Hunter Freedom, and Monster Hunter 2 soundtracks in a single disc. They included bonuses too, including an exclusive vocal arrangement by Norihiko Hibino and the additional music created for the smash hit Monster Hunter Freedom 2. Is this collection a recommended purchase?

The collection opens with the Monster Hunter main theme composed by Masato Kouda. The main melody is exposed with a warm brass fanfare and the luscious scenery of the game is subsequently introduced with swelling strings, light percusssion, and exotic woodwinds. Taking an ominous turn with a dissonant canonic take on the original fanfare, the theme gradually intensifies into an action theme with brass shrills, demanding progressions, and amazing percussion to depict the encounter with a wyvern. From 1:56, the theme is presented into the form of the march with contrasting grandiose and contented sections decorated with trilling flutes and fluttering strings. Overall, a wonderful cinematic piece to introduce the stylistic and thematic elements of the series. The theme also receives a straightforward arrangement in "Triumph!", but it is too interruptive in the collection. More effective is its rendition in the ending theme "Proof of a Hero" at the end of the collection. This emphasises emotional components more with orchestration by Shiro Hamaguchi and an extended development section.

The selection from Monster Hunter is otherwise brief but excellent. "Awakening" is an absolutely gorgeous town theme featuring evocative pan flute melodies supported by acoustic guitar melodies and ephemeral spiritual vocals. "Beneath all the Stars in the Sky" is a contemplative addition with heartrending flute melodies supported by gentle guitar harmonisation. "The Moving Mountain of Sanctity" explodes after numerous unresolved brass fanfares and organ passages into "March for the Heroes", a brisk snare-driven chorus-dominated gem with the deepest development of all the action themes. The continuity of themes is reinforced this time by their presentation on the same track. Even more spectacular is the medley of four action themes from the game, accompanying the battles with Lioleus, Lioleia, Gereios, and Gravimos, all exhibiting bold brassy timbres and fantastic rhythmic thrust with their use of crisis motifs and percussion. Not featured in the original score, "Flute Player" features a wistful flute solo accompanied by the series' characteristic guitar work. Simply lovely.

The Monster Hunter 2 selection also opens with the orchestral main theme. It is based on the melody from the original Monster Hunter, but the shape of the melody is made more elaborate and dynamic, especially with the triplet and intervallic leap characterising its dramatic peak. Its exposition is even more cinematic than the original main theme and listeners are taken on an emotional rollercoaster. A serene introduction gives way to a percussive action section, a spiritual interlude, a dramatic build-up, and finally a triumphant coda. There is a stunning vocal arrangement of the main theme in "Song of Beginning". The shape of the melody lends itself so well to the vocals and Ikuko Noguchi's ethnic-inspired performance is rich and expressive. Vocal expert Norihiko Hibino also offers an exclusive remix of the vocal theme at the end of the soundtrack. The vocals blend beautifully with characteristic Hibino trademarks such as dark jazz-influenced progressions, minimalist ethnic percussion, and soprano saxophone solos. The result is probably the biggest highlight of the collection.

There is quite a large Monster Hunter 2 selection otherwise. Obvious inclusions were the guitar-based "Village of Deeply Blessed People" and ethnic-influenced "Bustle of Dondurma". These central town themes receive appropriate playtimes after their excessively long soundtrack appearances. The battle themes for the title also get a nod with "Outlaw of the Jungle ~ Babakonga" and "One Antenna'd Daimyo ~ Daimyo Zazami", both of which feature great rhythmical impetus and exotic instrumentation use. There are also a few more exclusive tracks, namely the ancient instrument jam "Merry Musical Performance", the rustic guitar jig "Sounds of the Wilderness", and the bustling festival theme "Plum Trees of Dos". There is also a small selection from Monster Hunter Freedom. "Cute Ailu" and "Desiring Fame in the Land of Beasts" are both endearing light-hearted pieces. The battle themes "Howl of the Lone Wolf ~ Yian Garuruga" and "Illusion of the Dense Forest ~ Oonazumi" are exceptional efforts and perhaps the best action themes of the entire compilation. A pretty satisfying track selection all round.

The second disc of the soundtrack features additional music composed for Monster Hunter Freedom 2. The opening theme lives up to the dramatic standard set by the console games even though it actually reprises the original main theme. Even more impressive is its orchestral rendition in "Successful People" at the end of the soundtrack. The town theme "Theme of Pocket Village" and battle theme "The Roaring Dragon Bearing Its Fangs ~ Tigarex" are also continuous with their predecessors, but this doesn't stop them from being spectacular compositions in their own right. Perhaps the most enjoyable additions to the eight track selection are the lighter tracks, such as the especially lyrical ditty "Amusement Quarters of the Snowy Village" or the soothing "An Ordinary Day on Pocket Farm" and "Stylish Chefs". Finally, a mention to the track represented simply by three cat paws. This is actually a jam featuring several Devil May Cry themes created by Masato Kouda and Tetsuya Shibata. The catch? It's decorated with cat meows and some other silly voice samples. A select taste but definitely a hilarious bonus.

The Monster Hunter series finally gets it right! After fantastic scores but troublesome album releases for the two console games, the Monster Hunter Hunting Music Collection ~3rd Anniversary Best Track~ compiles most of the best themes from the series into a highly enjoyable compilation. There are also exclusive tracks and arrangements that, while perhaps not enough to demand a purchase for those who already have the console soundtracks, are among the highlights of this collection. The Monster Hunter Freedom 2 tracks are a pleasant but short bonus too. This album is still a fairly short compilation so there will be omissions that dissatisfy people. However, this album serves as a great purchase for casual fans of the series' music and a possible starting point for bigger enthusiasts.