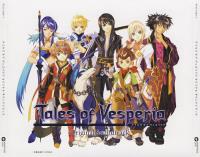 Tales of Vesperia marks the beginning of a very odd direction for mainstream next generation J-RPG games. First of all, it is the first Tales game to make it to a Microsoft console, among many other series. Secondly, It marks the debut of yet another unknown Namco composer, Hibiki Aoyama, alongside series' veteran Motoi Sakuraba. There has been some speculation that Aoyama is just another name for Shinji Tamura, but there is no proof on that matter. If it is him though, his contributions here are, in my opinion, his best ever. I'm done rambling though so let's get on to the best part — the music.

"The Dawn of Departure" is a pretty typical Tales title theme. It doesn't have that happy-go-lucky feel that the rest of the Tales themes have though. While repetitive, it hints that this game might be a bit darker than some of the past titles. "Time of Elegance" was the first track that received notice from me. While sounding somewhat sad, it has a glint of hope that shines through the harpsichord and piano. "Furnace of War" is typical for the series battle themes. A distorted electric guitar takes the lead throughout the entire piece. Despite it being generic, I still have high praise for this one. The next track worth mentioning is a diamond in the rough, so to speak. "Betting in this Bout" is probably Sakuraba's best boss theme ever in the series. It has a jazzy feel, led by a piano and some synth resembling "Chaotic Dance" from Baten Kaitos. Hibiki Aoyama gives us a very strange dungeon theme following this. "Pleasant Intrigue" is heavily bass driven, with sound effects of chimes blowing in the wind. It's not my favorite of his, but there are sections of it I enjoy very much. The last track worth mentioning brings a tear to my eye. "Around the World" is a beautiful and lush orchestration that plays when the main character and his cohorts see the ocean for the first time. Aoyama proves himself with this track alone. It is absolutely stunning.

For most large albums such as this, the middle discs are usually the "dead area". That really isnt the case here. Sakuraba gives us a very peaceful and serene town theme in "Evolution and Harmony of the Beautiful". The repeated piano chords and woodwind instruments meld together very well, making for a town theme that doesn't really have that Tales sound I spoke of earlier. "A Vow of Unity" is one of my favorite Aoyama pieces. The percussion and piano sound very well together, and the rock organ later on in the piece gives a somewhat dark track a little hint of insanity. Moving on to what most feel is the best part of the album, "Burning Fighting Spirit" is another Sakuraba battle theme, but this one is different. It actually sounds like this could fit in a Star Ocean game using staple elements he normally ditches in the Tales games. The rock organ and synth combo is fresh after his sometimes boring battle themes on this series. The same is felt in "A Formidable Foe Stands in the Way", which happens to be my favorite "normal" battle theme on the album. This track has more of a rock feel, with the organ sounding somewhat distorted. I love that sound!

Disc Three is the darkest collection of Tales music in the series. It doesn't start off that way though. The first track worth mentioning is also one of the first tracks that was ever heard from this game. "The Ancients Float in the Sky" is yet another place where Aoyama proves himself to me. The feeling of being with nature, the sounds of water trickling, and the calming string work provides the definition of a mood-setting piece. I don't think any piece of game music has ever done as good of a job at painting a picture in my head as this one. It seems like where Tamura never really had a style or a direction he followed, Aoyama has a goal of getting straight into our minds. "Chance for a Big Turnaround" is the first epic battle theme on here. It is heavily string based, but the distorted electric guitar really adds a chaotic nature to this piece. "Cutting Off the Dark Ambitions" is another chaotic battle theme and is actually pretty cool. This must be a major boss theme or something, as it is almost psychotic sounding — mostly string based with random synth work. It is all over the place, and I love it! The rest of the disc is either cut scene tracks or mini-game pieces, none of which are worth mentioning in detail. I will, however, bring up another Aoyama piece. "Serious Match!" is a very fast paced and light-hearted track that almost sounds like a battle theme. Some of the synth work in the middle of the track is very enjoyable. Man, I hope Aoyama returns to the series. So far, I am really enjoying the change.

Well, I've talked about epic throughout this entire review, and you need to know that everything I said regarding the matter needs thrown out the window for the final disk on the album. "Tenacity" and "Undying Resolve" are essentially the same battle theme. The former focuses more on the organ and the latter more on synth. "In Pitiful Silence" is a beautiful piano solo from Sakuraba; the synth voices and string work that pops up intermittingly gives it an epic feel. "Echoing Breath" is actually the track on here that proved to me that Aoyama was real. The intro and most of the piece sounds like a typical Tales town theme, but then I heard something that made me fall out of my chair. Violin! Yes, Aoyama uses a real violin sample in the second half of the track, and it is absolutely stunning. The very next track, "Fury Sparks", could be an epic battle theme. I'm sure it's not, though, as Sakuraba wouldn't give up a battle theme slot to this newcomer. That kind of upsets me, as this is an amazing display of skill. I would take this over some of Sakuraba's generic battle themes any day. The next piece, "Moment of Ruin That Shakes the Heavens", proves that Sakuraba DOES care about this series. I'm not really sure if this is a battle theme or dungeon theme, but it is killer. The synth solo close to the repeat is a highlight of the track, along with the piano directly before the solo.

"The Final Showdown", which is the first of two final battle themes, takes the series in a different direction as well. This track is mostly choir based with Sakuraba's wonderful prog rock style written over top. "A Once-in-a-Lifetime Duel" is very similar to the previous track with a little more of an epic feel. Again, this is probably the best series of final battle themes in the whole franchise. Even though the game is won, the next several tracks do not sound happy. This gives me the feeling this game does not end as well as some of the others. The final track on the album blows all of this out though. "The Story Ends, The Travel Begins" is a beautiful piano arrangement of the theme song "Ring a Bell" to this game. A very soft drum loop plays under piano and intermittent strings. I haven't heard "Ring a Bell" yet, but if this is any indication of what it sounds like, then it is a must have.

Listen up Tales fans. I have heard every Tales soundtrack that's been released and I have to say this is the best one to date. Sakuraba must have had some extra time on this one, because his works are just plain awesome. Hibiki Aoyama has made a name for himself in my eyes as well. If he does turn out to be Shinji Tamura, then kudos to him; his lack of composing recently has led him to learn some amazing things. I don't think it is him though. Anyone who is a fan of the series needs to place this one on their must have list. Sakuraba fans? If you have been less than pleased with his past work on the series this might just work for you as well. It kind of has a Star Ocean meets Symphonia feel, which isn't a bad thing at all. Buy it, that's all I have to leave you with.