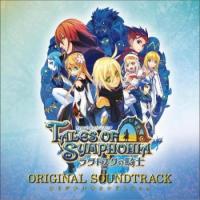 The Tales series is full of rehashed sequels that often have subpar soundtracks to accompany them. This has left my enthusiasm about most upcoming Tales releases at next to nothing. However, Tales of Symphonia did have one of the best soundtracks for the series, so maybe this one would live up to that as well? The idea of a Pokémon-style Tales game has me very turned off so I was praying that the soundtrack kept with the same style and still had the fun factor the original had. Motoi Sakuraba and Shinji Tamura contributed a handful new themes to the score and also arranged nearly all tracks from the first Tales of Symphonia with slightly improved sound quality and subtle refinements. The overall result is impressive. Let us walk you through the journey of discovering that Motoi Sakuraba and Shinji Tamura CAN create a soundtrack sequel worthy of our stamp of approval.

The soundtrack opens with the theme song "Ninin Sankyaku (edit ver.)". It's performed by misono, lead singer of the former band DAY AFTER TOMORROW, who already performed Tales of Symphonia's two theme songs and Tales of the Tempest's "V.S.". The track starts with with an electric guitar intro and soon Misono's voice appears, which overall sounds OK, but can be quite annoying when she reaches higher pitches. The melody and the rock arrangement are enjoyable and well fitting as well. However, the song lacks a bit of the power and memorability the previous theme songs of the series had.

Considering the original instrumental compositions first, the title theme "Knight of Ratatosk" is a soft orchestral theme with a minimalistic style while "Legend of SYMPHONIA" is a typical cinematic composition that builds up dramatically until it ends on a lush note. "Avenger-Richter" is the first of several new character themes and is a rock-inspired piece with mostly electric guitar riffs, strings, harpsichord, and percussion. It's sadly a bit repetitive after a while. "Beat One's Way" is a hectic guitar-driven piece which works to create a crisis atmosphere, but overall is one of the least memorable pieces among the new compositions. Luckily "With Courage," the main boss battle theme, is much better. It features a typical rock style and is reminiscent to previous battle themes, but I like the dramatic development here. Not one of the most original additions, but still enjoyable. As we talk about battle themes, Tales of Symphonia's first battle theme "Full Force!" is arranged on the first disc as well and, like almost all arrangements, it sounds more mature and enjoyable due to the newly added sections. As for the other arrangements, they're very nicely done, but most, such as "Water Symphony," "Moonlight," or "Shining Dew," sound like the original. However, a few get elaborations such as added instruments in "The Grudge" or new sections in the victory theme "Won the Battle".

Disc Two begins with a very emotional orchestral piece. "Raising a Curtain" does a splendid job at conveying all the emotions Sakuraba wants to express. Another new and very enjoyable piece is "New Fight New Labrynth"; it has a style similar to Sakuraba's "Mission to the Deep Space" series of dungeon themes. The problem I have with most of the arrangements on this disc is that they don't vary a whole lot from the originals. While some might say this is a good thing, the album ends up having a few stale moments where it sounds in need of something new. However, there are exceptions. For instance, "Derris-Kharlan - A Faraway Star" took a much lighter approach here and the ethereal vibe is very enjoyable. Tamura seems to be much more prominant on here as well. "Danger Signal" really sums up his style in its 1:07 playtime. But let's face it — the bland and unoriginal pieces from the soundtrack are mainly Tamura's responsibility. This disc does feature a new battle theme as well. "The More That I Try" features Sakuraba in a style he doesn't use too often. Electronic sounds create a nice but rather uninspiring melody. The progressive rock percussion makes up for that, though, making this a decent addition to the album.

After the slight disappointment of Disc Two, the subsequent disc easily compensates. Disc Three houses some of the best arrangements and one of my favorite Tales battle themes. Yup, "Like a Glint of Light" has a more grungy sound to it now and the prog rock features are accentuated much better in this version. "A Snow Light" still has that wintery feel to it, but it does sound richer and has more energy this time; in fact, it almost has a jazzy feel to it. It's weird, but it's an incredible town theme. Zelos' theme is almost identical to the original version, but still worthy of a mention for the whimsical and downright fun attitude it expresses. Now, though, I have to take some time to mention my favorite track on the album — and it's a new composition at that! "A Life-Threatening Quest" is just one of those amazing prog rock dungeon themes that Sakuraba is so good at creating. The emotion and tension conveyed in this track surpasses most other Tales themes he has composed. Strings and percussion are the major players in this one, but really don't stand up as my favorite parts of the piece. That's left to the intro, which has a synth sample that really expresses the melody well. At the end of the day, this disc shows us what a technical upgrade is susposed to sound like. Several incredible new compositions just make the pie even sweeter.

Disc Four starts off with an hectic action number with the title "Climb It Hastily!". It sounds like an crisis theme with mostly use of strings, fast-paced percussion, and brass elements. "Gladsheim - Prison of Soul" is a very ambient piece reminiscent of Sakuraba's Golden Sun work, dominated by a bass line and some additional effects like harpsichord and sound effects. The excellently done battle theme "Person Who Conceives Frenzy" will easily inspire memories from the Star Ocean series; with its Baroque-inspired mix of harpsichord, strings, and woodwinds, it's very reminiscent of "The True Nature of All" from Star Ocean The Second Story. One of the most memorable and deep character themes from the original was "Presea". The emotional piece fits the character's personality excellently and this is enhanced by the arrangement, where the power of the strings are used to their full potential. "SHINOBI Life" has a great Eastern influence and has gained more power with the use of the score's percussion. It's also one of the tracks arranged from Tales of Phantasia, namely "Mysterious Japon".

Moving towards the climax, the theme for "Kratos" is this time a bit low-key without use of percussion, but builds up an dramatic atmosphere by incorporating strings and brass elements. In my opinion, it's one of the most dissapointing arrangements from the score compared to the original. The rock elements return in the track "I'll Go", where Sakuraba once again uses electric guitar and percussion. It's quite enjoyable, but too short. The last dungeon theme "Ginnungagap - Rip in the World" is a lush orchestral theme with standard features from Sakuraba. The final battle theme "The Wilderness of Sadness" is one of the more memorable original themes from the score. While it features some notes from the previous track, the piece is full of power, memorability, and emphatic percussion use. Some may call this type a mix of Golden Sun and previous Tales battle, but it's a worthy and enjoyable theme in its own right regardless. "Antinomy" is another battle theme, but this time more atmospheric and low-key without any percussion except timpani. The rest of the score features some excellent ending themes, among others two excellent piano themes which could come straight from Sakuraba's solo album Forest of Glass.

The Tales of Symphonia Dawn of the New World Original Soundtrack is a worthy extension of the Tales series and features once again the marvelous work of the duo Sakuraba and Tamura. The tracks from the original Tales of Symphonia were remastered and sometimes slightly remixed, which makes them almost more fun to listen to than the original versions. The newly composed themes are all well done and fitting together with the rest of the score, though they vary in terms of memorability. Overall, I recommend this soundtrack for all fans from the first Symphonia, other Tales games, and of course Sakuraba and Tamura's work.

Album was composed by Мотой Сакураба / Синдзи Тамура and was released on July 09, 2008. Soundtrack consists of 82 tracks tracks with duration over more than 3 hours. Album was released by Avex Trax. 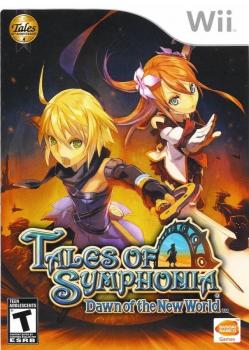